Fleshcrafter Intrigues of the Idle Nutrient-Rich

Who are the nutrient-rich? The leftover scraps of fleshcrafter dynasties from the Cyclopean Empire that once ruled (and killed) the Turtle. In a world where the basics are, in general, vastly overabundant - one can just pull meat out of the ground, so long as the area has not yet begun to decay - what does nobility mean? In the final days of the Empire, the dynasties claimed vast quantities of resources and land in the Final City (that would one day become the Meatropolis). They intended to use it to maintain control over the shattered remnants of civilization, parceling it out as necessary to the needy and the hungry as they once did on the barren shell.

But the ways of the organ-dwellers bypassed them entirely; as the Meatropolis grew, they realized they had no leverage but space, and even that was barely important as vertical dwellings grew on the side of the heart like a patchwork of scarification. The average dweller of the Turtle takes what they need, and no more - what use would they have?

And so this is the problem that the nutrient-rich face: they took far more, and now need to find things to do with it. Most leave them to their intrigues, or involve themselves when it would be fun. or they want access to these resources for their own ends, for their plans need vast quantities...
Clone Schemes
There are innumerable ways in which a clone of oneself can be used (and misused). Keeping it for replacement parts is merely the most pedestrian of schemes, and would be scoffed at by any truly decadent noble. Keeping it as a delicacy? Now that's more like it. Flash-implant it with a piece of your soul, so that it can behave as you at various social functions that you are far too busy to attend. Make many such clones, and see how they tackle problems that you have exhausted yourself on. Have a family all of clones of yourself. Pass down your inheritance to your clone just so you can giggle at writing the worlds "all to me" in your will. Clone other people - with their consent (good if creepy), or without (evil, but you're a noble, that's practically part of your job description). See what it's like through someone else's eyes for a day - or the rest of your (their?) life.

Clone someone else's descendants to sow discord and mischief in their household, or besmirch their good name. Challenge someone to a duel, then send your clone in your stead (rig your clone to explode when killed, your rival isn't getting out of this one unscathed). Disappear on sabbatical without anyone noticing that your clone is running the day-to-day in your stead. Use clones of yourself (or your clients) as surgical, mutational, or alchemical testbeds for your newest experiments so you can be sure they'll work on their intended recipients. Clone yourself as a team of adventurers to do your bidding - who can you most trust, if not yourself?

Grow an entire garden based on your genome. Why must your clones be limited to your own form?

The masquerade has always been a staple of the noble caste. With fleshcraft, it has only become more popular, more precise, and more ghoulish. Each week brings a new event to a new bone-spire or subcutaneous ballroom. Between masquerading as creatures, faceless replicas, other members of high society, or characters of their own design, they bore none and are each the site of intrigues petty and grand. If vengeance must be taken, reputations made, new flesh-fashions tactically deployed, or fortunes broken, it is sure to happen here. Gossip flows as freely as lymph, every back room fills with trysts ostensibly forbidden by convoluted noble etiquette.

The impersonation itself, too, is perennially a subject of contention. While most basic changes can be wrought by any amateur fleshcrafter, far more detail, innovation, and art must be present if one is to share tables or furtive conversations with the truly important. Such art is in high demand - despite the abundance of the Turtle and the gross overabundance of the nutrient-rich's claims, skill (and style) remains seductively rare. Many intrigues surround mere access to renowned fleshcrafter icons, whose proclivities and interests are as fleeting as wizards' lives.

d10 Themes
1. Extinct animals
2. Heroes of legend
3. Facelessness
4. Come as someone else who you know will attend
5. Change faces over the course of the night
6. A particular architectural style
7. The alien
8. Sin
9. Fables, myths, and tales
10. Dreams

Architecture in the Meatropolis takes a staggering variety of forms, from the scrimshaw of the Siding to the jerky-streets of the Butcher's Quarter to the soaring rib-spires that mark its iconic skyline to the hulking bloodiron foundries on the coast of the Blood Sea. Fleshcraft in its most extravagant form is the raising of entire towers from raw meat and wet bone, weaving floors and windows and facades together into a cohesive whole that's more art than living space. Most such endeavors take dozens of fleshcrafters working in teams, or one fleshcrafter to devote years to growing one from a custom tailored gene-seed.

Like prize vegetables of the past, competitions are held every growing-season (a description of such a thing would require a full account of the calendar and what passes for seasonal variance in the decaying husk of the Turtle, take it on faith that there is such thing as a growing season). Miniature castles are displayed at impersonation balls like bouquets, ready to mature into their fully-fledged magnificence a few months hence.

The seeds of such a building are carefully cultivated and bred on small scales, or pruned from the side-rooms of buildings expected to bear strong, healthy young. Meat-architects then mutate and carefully inscribe the seed with patterns that will guide its growth as it matures into an adult building. Often, the final structure is never truly known until it has grown to completion, revealing fractal halls and hidden pathways unplanned by any mortal mind. In some schools of thought, minimizing these is a sign of great skill, in others, maximizing them is a sign of great artistic vision.

There are many different architectural styles and accompanying trade secrets, and all can be found lauded in noble halls - of course, ones grown by the architect whose praises are sung. Of course the architect themself may be willing to reveal features of their creation unknownst to those who dwell in it, for a favor... 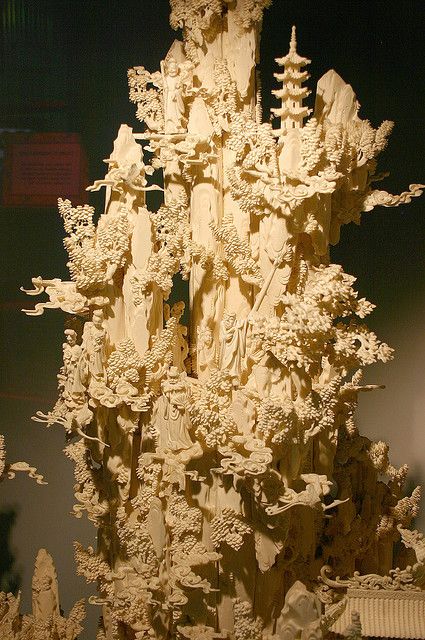 Resurrection is no longer the provence of heavenly bureaucracies or clerical conduits. Fleshcrafters can weave new vessels from the barest scraps of the old. So long as a corpse is recoverable (which is more difficult than one may expect, in this bloody new world of deepest pits and voracious parasites), it can be regenerated by one of great enough skill. Of course the wait lists are long. It takes much power, much raw meat, and much time - not to mention the risks of mutation, of amnesia, and the still-extant suspicion that the person you once knew is long, long gone.

The nutrient-rich have turned this into a status symbol, because of course they have. The accumulating mutations of many resurrections is a testament to many things - keeping up with the latest fashions in a holistic, full-body manner, or the foolish bravery to take on challenges and set records that are universally fatal, or simply the status needed to become the victim of political assassinations several times over. Beleaguered fleshcrafters find time for their personal projects between scraping the remnants of their patrons off of floors and walls and ceilings, and resurrecting them to the requested degree so they can continue providing their obscenely vast resources.

These gruesome customs have spread like wildfire through those with the resources to participate. Often, the end of a fashion season is marked with a mass resurrection - and a corresponding mass grave.

In the vastness of the cosmos, there lie trillions of spores from millions of worlds, cast off into space in search of ever-further lands in which to lay down tendrils and expand, expand, expand. Ogoath's defenses against such an invasion failed catastrophically when the Cyclopean Empire slew the World-Turtle, and now the fungi feast upon the greatest banquet of rot in existence. They seed microcosms of their old worlds, then war between each other in fractal wars at every level of biology. These alien wars from alien worlds, upon a biology familiar but of scale unimaginable, create biomes utterly hostile to mortal life - and beautiful in their violent throes. Expeditions to the Turtle's extremities returned decimated, but rapturous, and the nutrient-rich couldn't get enough.

So go adventuring party after adventuring party, seeking out beautiful or interesting fungal varieties to bring back as spores for the nobility to grow in specialized gardens. They brave toxic atmospheres, extradimensional fungal beasts, creatures vaster than anything that existed in the Old World, clouds of disassembler-wasps, semantic blossoms that will consume through one's comprehension of them, geometries that change as the battlefields between duelling ecosystems advance and recede. Any who return are feted handsomely. The hermetic emporiums of the nutrient-rich span stadiums, entire sealed gardens as art statement or biological experiment or eldritch farm. The truly obsessive may fund adventurers not to venture out into the dangerous extremes of the true biomes, but to steal or sabotage a rival's work. So goes the arms race. 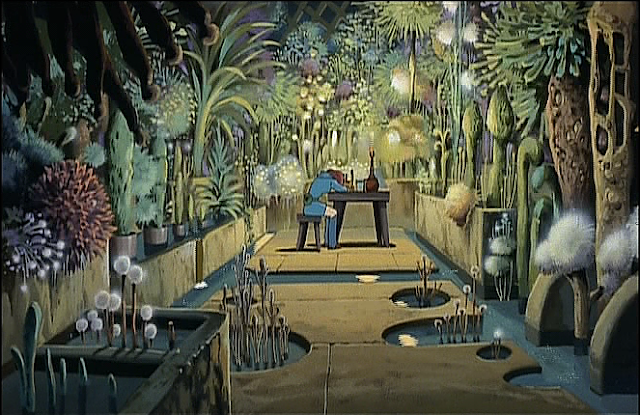 Heists! Intrigues! Back-alley fleshcraft! All these things keep the attention of bored heirs and tired nobility. Those of a more active persuasion than fungal gardeners or skyscraper topiarists spend their days planning elaborate ventures to steal each others' unique and valuable organs out of their very torsos. Black markets do a thriving trade in instruments of spycraft and surgery, teams of adventurers are hired to baby noble heirs seeking the thrill of the game (or protect nobles who're likely to be targets), fleshcrafters who want to join in the fun grow organs as decoys, or as incredible luxuries that can't help but attract the attentions of self-styled master thieves.

In this way, organs change hands (and bodies) again and again. A heart may beat its way through the chests of a dozen heirs, a pair of hands is used to burgle and is burgled in turn, even one's brain may find itself on the inside of a keratin-glass trophy case (in good taste, it is of course returned, though not without initials carved into its grey matter). Such trophies are displayed in tantalizingly visible ways, hanging from ballroom ceilings or sitting on pedestals in personal chambers, inviting the game to continue. Some spectacular braggarts install the organs inside themselves, becoming patchworks of their hard-won victories, and high-profile targets themselves.

Escaping the game is a trial in and of itself. To be unvaluable, rather than invaluable, takes effort and time and attention. One's attempt to leave may only invite more scrutiny and thefts, and one's last heist may prove their greatest achievement of all. A foolproof way, as always, is to pull off a trick so impressive that none wish to tarnish your reputation by sullying it.