"Where, in the dumpster?"

Mimics are anxiety in monstrous form. It's not paranoia if everything you touch really could be out to get you. Keep a stack of post-its on hand for labeling things you know aren't mimics. Trust nothing. Trust no one.

Mimics only have near-perfect mimicry. Sometimes, they slip up; sometimes, they leave traces. Roll the tell before they discover the mimic. Bigger and older mimics may have no tells at all, but ensure that players have some sort of countermeasure against them - it's not just an instant kill when they open it, that's no fun. 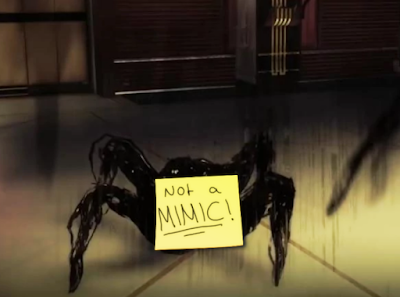 Pizza box. In supernatural suburbia, pizza eats you! Sneaks into trunks of delivery cars, devours a pizza, then replaces it. The delivery driver doesn't know what doom they're bringing to your door (but it smells delicious).

Email. The most dangerous chain letter. Open it up, and it'll try to eat your data, then your brain.

1 HD. Armor as leather (or more, if it's on a chunkier device). Animates the device it's on, giving it legs and teeth. If you can delete it (easier said than done when it's trying to chomp on your hands), you instantly kill it. Can bite for d6 piercing damage, or static discharge for d4 lightning damage to everything within 10'. Any electronic device that can receive/display email must save or receive a copy of the email mimic.

Trash can. Subsists on a diet of possums, raccoons, squirrels, and dumpster-divers. Leaves an acidic trail behind it that exudes a noxious stench of decaying flesh. The closest thing to a normal treasure-chest mimic you'll find in the city. Each has a designated hunting ground; fights heard in alleyways are occasionally a pair of trash can mimics fighting for dominance.

2 HD. Armor as leather. 2 attacks per round (any combination of tentacles (d6 bludgeoning, save or grabbed, 15' range), bites (d8 piercing), and lobbing a wad of sludge (60' range, d6 acid, 10' radius detonation, sticky - targets are slowed (save ends)). Gets a free bite attack against everyone it's got grabbed.

Corpse. Poor fucker, but looks rich enough to have something juicy on it. When you try to loot it, it splits open lengthwise into a toothy maw. Speaks in a genteel human voice. Will morph back into humanoid form and run once reduced to half HP - and the PCs are gonna look like they're attacking a hapless bystander. Likes hiding in dumpsters, car trunks, rivers.

2 HD. Armor as leather. 2 attacks per round (any combination of tentacles (d6 bludgeoning, save or grabbed, 15' range) and bites (d8 piercing). Gets a free bite attack against everyone it's got grabbed.

Sidewalk. Step on a crack, it'll break your back and then digest you. Attacks at night, when there's no one else around. Spans d4*10 sidewalk tiles. Looks like a centipede made of concrete and sinew when it fully reveals itself. Hunts in packs; often an entire street has been colonized by sidewalk mimics.

2 HD. Armor as chain. 2 attacks per round (any combination of smashes (d6 bludgeoning, save vs. knockdown) and bites (d8 piercing)). Runs at double speed, can climb walls and ceilings.

Grand piano. Attacks when played. The strings within whip into a frenzy; anyone within 15' takes 1 slashing damage on their turn (no save) and must save or take another 1 when they try to move within that radius. It snaps its lid to bite, and charges far faster than its bulk would suggest. Kept half-domesticated by the rich, powerful, and guilty.

3 HD. Armor as chain. 3 attacks per round (any combination of strings (d6 slashing, 15' range), bites (d8 piercing), and charges (d6 bludgeoning, target chooses to either be pushed 10' or be knocked down)).

Streetlamp. Like an anglerfish. Exudes a clinging supernatural darkness within 100'. Can't move from its rooted foundation without great effort. Grabs travelers walking along the highway, or victims of car accidents.

3 HD. Armor as chain. 2 attacks (bite (d6 piercing and save vs. grab), lash (d6 bludgeoning and save vs. knockdown to all in 180 degree arc; range 30') or blinding beam (target is blinded (save ends)) per round. Will retract into sky and drop grabbed targets from 30' up.

Taxi. Waits to pick you up on the corner. Tinted windows. Can perfectly mimic human voices. Interior looks like a worn taxicab with distressingly human leather interiors. The front seat is occupied by a lump of misshapen eyes, teeth, flesh, and tendrils. When someone enters, the mimic reveals itself (as the entire taxicab) and tries to eat them.

4 HD. Armor as plate. Will try to run over characters as it moves (d12 damage, DEX save to jump out of the way). Has 3 tentacle attacks per round (d6 bludgeoning damage and save vs. grab) OR 1 tentacle attack and a move. Anyone it grabs, it will pull inside the following round. Anyone inside takes d6 piercing damage and d4 acid damage per round as they are chewed and digested.

The two following mimics have grown fat and vast over decades; slowly becoming entire buildings. Do you know what every building in your city is? Have you ever really looked at the skyline? Could you truly tell if that one was where it was yesterday?

Kill a structural mimic through defacing its component rooms (hammers, spray paint, and fire are your friends here), or by destroying its vital organs.

Gas Station. Convenient. Local. Hungry. Does actually provide gas, occasionally. Full-service; go inside to pay. That's when it gets you.

2 vital rooms. When destroyed, it convulses, spewing gouts of flame through cracks in the parking lot. Everyone within takes d10 fire damage (save for half).
Heart is in basement (see ambnz's post), stairs down are behind the counter.
Brain is on the roof, encased in what looks like an AC unit.
3 attacks per round. Within parking lot, can spread gasoline in 10' square puddles, then set it on fire. Inside or adjacent to building, tentacle lash to grab (d6 bludgeoning and save vs. sticky grab) and bite anyone who's been grabbed for d8 piercing (save for half).

Skyscraper. Ostensibly an insurance company, but no one knows anyone who works there or has a plan from them. Who would, these days? It's just another cog of the unfeeling, uncaring corporate machine. Some people still venture inside - urban explorers, lost tourists, people walking around late at night who need to get in from the cold. They're never seen again.

4 vital rooms. Elevators still work, against all odds, though they'll still try to eat you.
Brain in penthouse.
Heart in sub-basement.
Lungs on ground floor. Blows characters out of room, or slams them against walls.
Stomach in building core, in middle of elevator shafts. Constantly sloshes with incredibly corrosive acid; need armor or a hazard suit to even think about entering (and it'll ablate quickly).
When it's down to 2 vital rooms, will stand up and sprint down city streets in mad dash to eat as much as it can before it dies.
Inside, riddled with parasites. Carrion crawlers, smaller mimics, ropers, rust monsters, etc.
Has 4 attacks per round. Tentacles and bites against grappled enemies (you know the drill at this point in the post), or room convulsion to knock everyone in the room over (save negates). 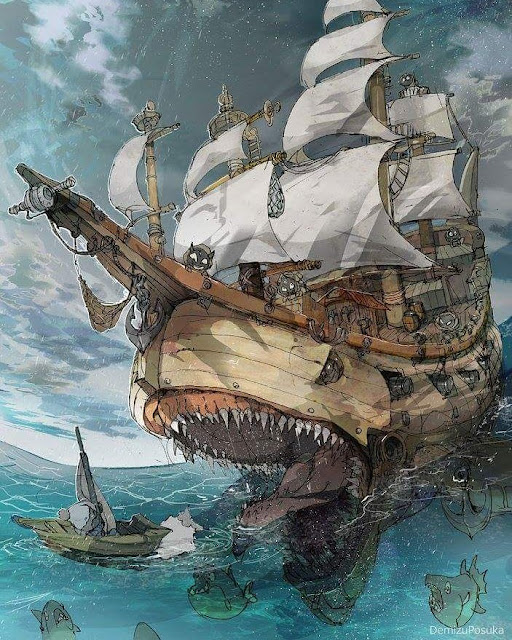