I've written these rules for a Star Wars game, but they can be sufficiently genericized for any space combat rpg. These are intended to handle ships the approximate size of the Millennium Falcon, the Serenity, a ship from FTL, or a Free Trader, but I've added rules for scaling up to capital ships and down to fightercraft. 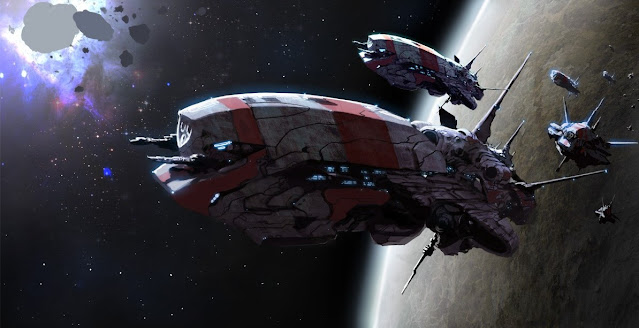 The Basics
Draw your ship on a 6 by 6 table. The ship plan can be top-down or from the side; either works for the purposes of this system. When shot at, roll a d66 to see if it hits and if so, what breaks. If the d66 roll hits a component, it breaks, and must be repaired to function properly. If a component with a character in it is hit, they save versus being wounded.

Chases and Pursuit
Often, ships will be pursued by their enemies in a chase scene through open space. This functions like combat against overwhelming odds, so the success condition is jumping to lightspeed where you can't be tracked or followed instead of destroying your enemies. Of course, if you're the one doing the chasing, success is disabling their hyperdrive and/or thrusters.
Actions
Ships go in order of their speed. Ships in a smaller size category are faster than ships in a larger category; fighters are faster than freighters are faster than capital ships. Each character gets 2 actions on their ship's turn.
1. Move. Characters can move between any non-Armor components on the grid if there’s a path between them. Must stop when moving into damaged component. Can't move diagonally, or into or through Armor.
2. Maneuver. In the cockpit, the pilot can do some fancy flying to break away, evade, or confuse their pursuers. Make a roll, and on a success pick a Maneuver to execute. You may, after seeing the result, Push the roll any number of times to get a +1 bonus for each Push. You can only Push each way once per roll.
Maneuvers
Break away. If you're being pursued, gain 1 distance, or 2 if you're faster than them.
Close distance. If you're pursuing an enemy, they lose 1 distance, or 2 if you're faster than them.
Jump to lightspeed. Must be at least 3 distance from your pursuit and outside of any gravity wells to ensure hyperdrive stability. You've escaped... for now.
Evasive maneuvers. Until your next turn, you may reverse the dice on shots that would hit you (ex. turning a 32 into a 23 or a 15 into a 51).
Crash a pursuer into debris, terrain, or another pursuer. Only works if there's something to crash them into. They take damage to a random component.
Ram. Smash into another ship. Roll to see which side you hit. Each component on that side of the target, and each unbroken component furthest forward on your ship, is immediately broken.
Something else. Negotiate with the GM.
Pushes
Power to engines. Divert power from one active component.
Strain. Damage an undamaged component.
Slow. Lose 1 distance from any pursuers.
Dump cargo. If you have cargo weighing you down, you can open a cargo bay and dump a unit of it into space.
Attract attention. More enemies emerge to pursue you. Only works if there's attention to attract.
3. Fire. A gunner can fire the weapon they're manning. Make a relevant test to fire; on a success you can target a specific square on the enemy ship to take the hit. On a failure, roll d66 to see where (and if) the shot lands.
4. Divert power. Deactivate one active component for the rest of the scene to move power to another component, giving it advantage on further rolls. Must either be in the cockpit or the component being deactivated.
5. Repair a damaged component. Must be in the component you're repairing. Repairs take a successful roll, and are just a temporary patch-job to keep the ship flying.
6. EVA. If you have a spacesuit, you can exit the ship from any exposed side of a component. Once you're on the outside of the ship, you can repair armor, or (if you're really stupid) shoot at enemies with your personal gun.
7. Help someone else in the same component. The helped character rolls with advantage. Covers co-piloting, spotting for gunners, aiding in repairs, etc.
8. Dump cargo. Next Maneuver roll gets advantage. Must be dumped from the cargo bay. Depending on the cargo, may have other effects as a distraction.
9. Open a channel to the other side. If they respond, you can talk with them, but you only get one roll to influence them before the turn ends - so talk fast and think faster.
10. Something else. Negotiate with your GM.

Components
Armor. If a non-Armor system would be hit, 1 piece of adjacent Armor is destroyed instead. You choose which piece of Armor is destroyed, but cannot choose to let the system be destroyed instead. Must be repaired from outside, either on EVA or when docked.
Bunks. Barracks-style bunks. Includes barebones kitchen/lounge.
Cargo bay. Holds 1 unit of cargo. If hit, cargo is destroyed.
Cloaking device. Invisible until acting in combat. Incredibly rare and fragile, can't be protected by armor.
Cockpit. Where the ship is piloted from. To maneuver or jump to lightspeed, must have a pilot in the cockpit.
Fire control. Can control all guns from this component.
Gun. Can be fired at enemy combatants or debris. Requires gunner. Many kinds of weapons with various abilities exist across the galaxy, including flak cannons, tractor beams, plasma throwers, torpedoes, missile pods, etc.
Hangar. Three adjacent undamaged Hangar components on a freighter can hold, dock, and launch one starfighter.
Hyperdrive. Permits interstellar travel. If it’s broken, you can’t jump to lightspeed.
Life support. Recycles and purifies air and water on the ship. If broken, you'll die in space within days.
Lounge. Larger kitchen, media room, real showers.
Medbay. Lets you heal characters' wounds aboard ship. Sterile surgical suite, micro-chemical laboratory, stasis tank.
Mining array. Can mine ore and dismantle scrap. Moves debris into adjacent cargo bays.
Radar. Requires comm officer in the radar room. Get additional information on targets, including enemy crew.
Reactor. Generates power and artificial gravity for capital ships. Every 5 non-Armor, non-Cargo Bay components requires 1 Reactor. If damaged, backup batteries can only power 2 components.
Shield generator. Creates an energy shield that blocks the first hit each round. More shield generators block additional hits.
Stateroom. Luxury master suite, reserved for the captain or high-profile passengers.
Stasis pods. Freeze passengers for long-distance travel, organic matter for transport, or prisoners to ensure they don't cause trouble en route.
Thrusters. Faster than ships of the same size with fewer thrusters. Must have their aft exposed to provide thrust. Can't Maneuver if all thrusters are damaged.

Because this is inspired by Star Wars and FTL, I handwave power and gravity generation on freighters and fightercraft. However, if you want  a slightly harder ship design, you can make reactors mandatory for all ships. Similarly, you don't need a Bunks component to create a technically livable space. Quarters on freighters are barebones - bunks are built into bulkheads; you live in the room you work in, you eat freeze-dried ration blocks. If you want more luxurious accommodations, the bunks and stateroom components provide the luxuries that passengers expect on long-haul flights, like "kitchens" and "showers".

Fightercraft use the same rules as freighters, but often forego life support, hyperdrives, or shield generators to minimize hit profile. Against larger ships like freighters, they always count as having evasive maneuvers active. Components (like guns) can be controlled from the cockpit, but cannot be repaired without external access.

Capital Ships
Scale everything up. Repairs take much longer - weeks, if you're fixing things in space instead of in a drydock. Shots from capital ship guns wipe out all shields of freighters at once, and all relevant freighter armor plates at once.

Capital ship Armor counts triple against shots from smaller ships.
Life Support becomes Quarters. This is where the crew lives. Each Quarters component sustains 3 units of crew. If Quarters are damaged, the crew remains alive - but will start considering mutiny if they're forced to live in unsatisfactory conditions.
Reactors are mandatory for capital ships, even in Star Warsy games.
The Cockpit becomes the Bridge, but functions the same.
Cargo bays also function as Hangar bays. May hold and deploy a squad of a dozen fightercraft.
Capital ships can also sustain powerful systems you can't mount on smaller vessels.
Interdiction bubble. Creates an artificial gravity well that prevents lightspeed travel. Ships must have 6 distance from their pursuit to jump to lightspeed instead of 3.
Spinal mount. Fired like a gun, takes up an entire turn to fire. Instantly damages every component on a ship if it hits.
Tractor beam. Fired like a gun. Ships caught in a tractor beam cannot Maneuver.
Some capital ships may use 8x8, 10x10, 12x12, or even larger grids. You still use a d66 to fire at these ships remains on a d66; the ship firing can choose which 6 by 6 block they're aiming at.
2 comments: