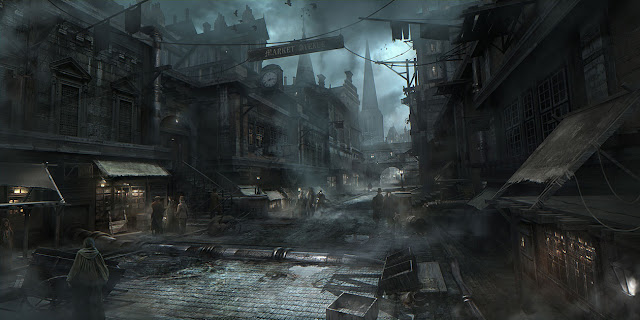 When I'm making a random generator, I've always been inspired by Joseph Manola of Against the Wicked City's essay on conceptual density - namely, that each entry has to be better than what I could come up with on the fly. Combining a few thought-provoking prompts is easier on the spot than thinking those prompts up, too. So welcome to a bazaar of bazaars, an emporium of emporiums, a selection of stalls and shopfronts that'll keep your party in business for as long as they're willing to pay...

There's pretty much one archetypical black market for fantasy settings. You've got your shadowy figure hawking illegal wares in a seedy part of town, then break out your list of cursed and rare items. It's all well and good, but not particularly memorable. I like to differentiate my entries by making them recognizably conceptually similar to the archetype, but one or two steps away from what the generic version is. A little more specificity, connecting up a concept that the players wouldn't immediately expect, think out the implications of the existence of a place like this or why it'd sell what it sells. All this requires brainpower I'd want to devote elsewhere at the table, but it makes a fantastic set of generators!


Venue
1. A bar in the seedy part of town. During deals and liasons in dark backrooms you can sneak even further back, into the shop proper. They only admit those intoxicated enough to ensure a purchase.
2. A contraption that displays wares behind a pane of glass and dispenses them when currency is inserted into a small slot on the side. Proprietor tinkers with the machine.
3. A narrow labyrinth of winding alleys leads inevitably to a barred, metal door. A Judas window in the door reveals only the proprietor's eyes. Leaving requires a map that only the proprietor sells.
4. A perfectly ordinary-seeming cheesemonger. Many cheeses are code for a particular black-market service or item, and those in-the-know will order those cheeses for delivery at their place of residence, where the Cheesemonger will personally deliver the item in question.
5. A secret door in the wall of another black market opens into their real moneymaking business. Or is it?
6. Abandoned manor is actually cover for emporium chock-full of surplus banned products hidden under furniture covers and layers of dust.
7. An abandoned storeroom in the lord's castle. Access to the market requires getting into the castle first.
8. An upscale hotel. Calls for a certain order of room service result in a particular individual arriving with an array of wares concealed beneath platter-lids and wrapped in napkins.
9. Beneath a cemetery's mausoleum. Any remains within have been disinterred, and the coffins filled with merchandise.
10. During a particular hour each week, a particular sewer tunnel flushes. It smells not of bile and ichor but of raspberries and thyme. In that hour, the merchant sets up their stall and their wares, and dismantles it all at the end.
11. In the city guards' barracks. It's how they supplement the pittance they get from the city's lords. All items guaranteed confiscated from the "real" criminals.
12. Loud and upfront, with no facade of legitimacy. They're close with exactly the right people in government, and often you'll find said people partaking of their wares.
13. Mineshafts beneath the city drop deep into the earth. They converge on a surprisingly well-lit and comfortable row of townhouses transposed into the rock. One is the market you seek.
14. No venue. Proprietor wears extra layers of coats even in the hottest weather, beneath which lie a staggering amount of product. Accosts adventurers back from their latest looting spree.
15. On the rooftop of a complex of buildings, with no sightlines to the ground. Accessible via service entrance to roof.
16. Street food stall sells new items daily, cleverly hidden beneath the countertop.
17. The back room of a publishing house. Their newspapers and pamphlets detail, in code, the day's stock.
18. The city's public forum hides an open secret. Deliberations are often cover for exchanges of illegal goods, while philosophers ranting at the sky slip in covert ads for their wares. Pledging your support will garner their interest, and an argument of moral principle becomes a coded haggling venture.
19. Wine cellar of a reputable winery does double-business selling illegal goods. Don't tap the oldest casks.
20. Zoo of ill and struggling repute uses animals as cover for the loud sounds and smells of their real business.

Proprietor
1. Cheery, heavily-scarred elf. Doesn't seem to realize illegality of or potential harm caused by products. Willing stooge? False persona?
2. Collective of street urchins. Vicious with both insults and shivs. Brook no quarrel or complaint.
3. Decrepit, but wears the attire of a king. Looks strikingly similar to the royal family. Speaks imperiously, but in whispers, as if being surveilled.
4. Devil, aristocratic, stinking of sulfur. All items come with lengthy fine print, merchant indemnity in case of misuse, and no warranty whatsoever.
5. Elaborately masked being with no exposed skin. Changes mask based on emotion they wish to display. Poetic.
6. Ex-adventurer, took over business from previous owner by force. Not exactly sure how the whole running-a-shop thing works, but knows the ins and outs of the products and the job.
7. Excitable apprentice mage, selling something that they stumbled upon in their research. Definitely way out of their comfort zone.
8. Family, parents and grandparents and children all staffing their business, teaching the next generation their hereditary trade. Rightfully proud, even of the grimmest crafts.
9. Frail, elderly human hunched over an elaborate contraption. They won't look up from their work, and respond with only the barest necessities.
10. Grizzled ex-mercenary. Personally vouches for the efficacy of everything in the store and has a tale of how each saved their life in the field.
11. Immaculate human, speaks like an upscale tailor. Willing to go to great lengths for their regular clientele (or those who may become regulars).
12. Large, boisterous orc in an elegant robe. Mercilessly critiques patrons' taste, but gives legitimately good advice.
13. Middle-manager type from the local mob. Missing a variety of fingers and facial features. Never stops grinning.
14. No proprietor at all. Items are carefully, meticulously labeled and laid out. If you remove one from the premises, the price is deducted in full.
15. Rat king. Served by a swarm of hundreds more chittering rats. Generous to those who respect the city's true, hidden ways.
16. Set of mechanical automatons acting eerily in sync. Will speak with many mouths. Who made them?
17. Shambling corpse. Communicates with a series of index cards laid out in boxes, or by pointing to signs laid out around the shop.
18. Shirtless, tattooed mystic reading from a set of ironbound tomes. Speaks in platitude, metaphor, and verse.
19. Spindly, nosy human with no sense of personal space. Very interested in the party's personal lives, and their exact intents for the items they purchase. They're a big fan.
20. Wizard, selling their failed experiments and outdated products of star-maddened genius. Insists you take some more with you. To test.

Products
1. Absolute tat, guaranteed to come in handy at least once so long as you carry it around religiously.
2. Angry, mutated spells heaving at the bindings of their spellbooks.
3. Blessings of forgotten and murdered gods.
4. Corpses and corpse accessories
5. Dirty deeds (done dirt cheap!)
6. Drugs, potions, alchemical reagents
7. Fine clothing and armors suitable for any occasion - even (and especially) the untoward
8. Incredibly cursed magic items. The curses are a selling point.
9. Magical creatures in small, easily-carried, soundproofed glass jars. A command word opens the lid and returns them to full size. The same word imprisons them again.
10. Maps and floor plans. Usually up-to-date, often of locations otherwise unknown.
11. Mercenaries
12. Mutations!
13. Other adventurers' contact information
14. Other peoples' fortunes - both the money kind and the future kind.
15. Outlandish, impractical, brutal weapons. As dangerous to their wielders as they are to their enemies - but also, very cheap!
16. Paraphenalia of mythical heroes, famous rulers, other notables. 3-in-6 chance any particular item is counterfeit.
17. Poisons, venoms, and flasks of plague. Each is the cure to another.
18. Spices, rare meats, wriggling things presumably for consumption
19. The last copies of lost books and records (all other copies have been destroyed, either before collection, or to ensure this is the last copy)
20. Thieves' tools and guards' timetables

Payments
1. A percentage of any loot gotten with the aid of the shop's merchandise
2. Art
3. Beating the owner in a riddle contest
4. Blackmail on yourself and others.
5. Blood. Lots of it. Cutting your hand won't do the trick here; you need to exsanguinate a whole horse to buy their cheapest items.
6. Captured magical creatures.
7. Confirmed bounties.
8. Contracts for future favors, callable at any time for any reason.
9. Converts to their religion
10. Credit, but they take your body parts as collateral.
11. Currency from a nation long fallen.
12. Exclusive rights to your life story.
13. Ghosts.
14. Good ideas.
15. Knowledge of secret places - or secret entrances to very well-known places.
16. Magic.
17. Raw metals - preferably adamantium, mithril, orichalcum, occultum, but raw gold ore may do in a pinch.
18. Whatever they sell, for far less than they sell it for.
19. Years off your lifespan (in multiples of 13)
20. Your skills and abilities