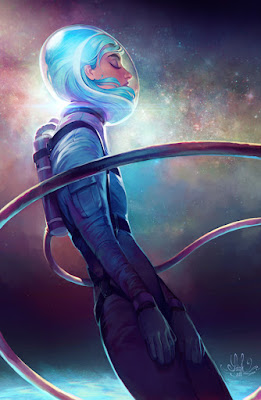 Deep Space Bitches is a far-future science fiction hack of Dungeon Bitches, Emily Allen's narrative tabletop role-playing game about disaster lesbians falling in love and getting fucked up in dungeons.
In the distant future, we've spread across the stars - but the ephemeral promises of harmonious post-scarcity utopia have been long-since dashed against the creed of corporate profits and imperial dominion. The many oppressions that characterize the present have only grown, metastasizing across star systems and replicating themselves in familiar forms on alien worlds. If you're queer, if you're trans, if you're not white, if you're a woman, if you're poor, if you're disabled, if you're an android or a psychic or the wrong shape of alien, the future closes its doors to you.
To survive the galaxy, you are either born to power (which looks a lot like it does today), you keep your head down and never question your shitty lot in life, or you take a leap of faith and push back. Unite. Organize. Embrace fleeting joy and irrational hope, and maybe - just maybe - make a fraction of the future a better place.
The Galaxy
Habitats and Factions
In order to change the galaxy, you need to know how it works. Who makes the decisions that affect your life at the bottom, where the air and food and water come from, who you can trust (others on the margins) and who you need to defend yourself against (cops).
What's your deal?
Setting intro, the Fury, and the Reconstructed
The Fury is a veteran of the battlefields of the distant future, fighting losing battles against an implacable imperial foe or press-ganged into a war she never agreed with. Her experiences have scarred her, but also given her a very specific set of skills - and regrets.
The Reconstructed is more machine than flesh. She would have died in a freak accident - if someone hadn't decided she was more valuable alive, and rebuilt her (whether she liked it or not). Now she's indebted to her resurrector, but also has an otherwise-clean slate to build a new life - if she wants to.
Wonders and horrors of the galaxy, the Ghost, and the Psychic
The Ghost in the Machine is trapped in a digital hellscape, whether by accident or by someone else's malicious design. She can interact with the world through technology and holograms, but her nature is fundamentally changed - a source of both distress and power.
The Psychic is hunted for powers she never asked for, by organizations who want to use her for their own gain. Her inexplicable abilities give her an edge, but also mark her as an outcast - a particularly valuable one.
Corpro-imperialism, the Dreamer, the Idol, and the Scion
The Dreamer is a bright spot of hope in a hopeless galaxy. She has a plan to lift up her community in the face of vast machinery of oppression that would grind her into dust. In a galaxy wracked with trauma, hope for a brighter future is its own form of power.

The Idol is the envy of the masses, famous and talented in equal measure. But she is beholden to many masters - her image, her fanbase, and above all her manager. Can she navigate their demands to do what is right?

The Scion is bequeathed tremendous status and resources by her superiors, but only as an extension of deeply oppressive systems. How far can you stretch your power to help those in need - and what will you do when your superiors demand you stop?
Movements and outsiders, the Android, the Technician, and the Visitor
The Android is on the front lines of the fight for freedom. She was manufactured to be a tool, to provide for the vast labor needs of the galaxy with no regard for her personhood. She escaped, but billions more still suffer as she did. Her fight is not some theoretical future revolution - it is present and clear.
The Technician is skilled at the thankless task of maintaining the technology that underpins modern life between the stars. Her jobs never pay enough and the constant failures of corporate infrastructure force her to be everything to everyone else - even when she can barely provide for herself.

The Visitor is from far, far away - whether a remote colony or an alien species or even a different time period altogether. She has found herself in this nightmarish world with rules she does not understand, but her perspective lets her clearly see injustices that others have long since accepted as normal.
Liminal and forgotten, the Unperson and the Spacer
The Unperson is invisible. She transgressed, and the corporations or the empire cut off all her access to what few resources they still nominally provide. She is no longer legally a person, and barely ekes out survival in the fringes of galactic society - but the blade from the shadows is the one they will never expect.
The Spacer is the lifeblood that connects far-flung habitats together, a crew member on a long-haul freighter who's seen things between the stars that others relegate to rumor and exaggeration. She never stays anywhere long enough to put down roots, but that doesn't mean she'll go unnoticed.