Elves and their Cities

Elf: Reroll DEX and another score of your choice until you get higher results. Roll a negative mutation whenever wounded by an iron weapon (or other industrial source).

Elves are fragments of a god-machine. They look like humans, just better - taller, lither, stronger-sensed (from their large eyes and pointed ears), perfectly symmetrical, moving with silent, practiced ease. They're hyper-optimized for specific roles, and cutting into an elf reveals twisting, arcane biologies that are nigh-impenetrable to any mortal physician. Such is the physiology of an elf, that every component depends on every other component for every task, interconnected deeply and powerfully in ways only gods (or elves) can understand. They are smarter than you. They are stronger than you. They are more elegant than you. And if anything goes wrong, they fail in catastrophic ways.

Elven reproduction is slow and rare. As each elf is a unique piece of a god-machine, they will tend to take on forms of dead elves, lost pieces, rather than appearing similar to their parents. This is how they instinctively take their names; an identifier for their place in the Machine. These are arcane, obscure, and complex - this is how you get elf-names like Aetenathir, or Lirael'thelian. The names were not meant to be pronounced by mortals, rather, merely to be recognized by gods and other elves. Names are all unique among living elves. What do they mean? What does Part A mean in furniture assembly instructions? Elven rebels and hermits tend to strip themselves of names, or take on obscurative ones, so as to prevent other elves from interacting with them in ways that reproduce elven culture.

They are masters of the emergent. An elf can trace an event back to its thousand thousand causes, each no more significant than a butterfly's wing-flap. Humans instinctively calculate the path of a moving object in their subconscious, then move their hand to catch it. Ask one how they did it, and they'll shrug. An elf will explain each facet of wind speed, of rotational motion, each piece of calculus they went through in parallel to put their hand exactly where it needed to be. Every piece of data that an elf acquires, through its hyper-attuned senses, goes through its thousand parallel conscious processes and comes out collated and factored into its behaviors and knowledge. An elf knows exactly which question to ask to get exactly the answer it needs.

Elves were designed to be perfect, infallible parts of a perfect, infallible machine. But gods are fallible, and petty, and malicious, and shortsighted. They did not account for a changing world. So elves, designed too cleverly for their own good, have residual, debilitating allergies to iron, and to smog, and to every other part of human and dwarven industry - things the gods did not see, and never predicted. They can't evolve past this; they don't evolve at all (for if they did, they'd no longer function for their intended purpose). Because of this, an elf's supposedly immortal life is always cut short by painful, inevitable attrition. Their wounds spread, changing their bodies in unpredictable ways, causing systems to fail and cancers to grow in utterly unexpected parts of the body. An old elf may scarcely resemble one of its younger brethren, with forests of fingers, bark for skin, and toxic fruits hanging from its limbs.

One of the pre-eminent scholars of Elven language has published a fantastic treatise entitled The Perfect Languages of Elves, to which this author makes frequent reference.

Elven societies have no government. Each elf acts on its own, as a perfect cog in a perfect machine. This is what they were made for, after all. All communal needs are met, all resources gathered, all crafts produced in eerie silence and harmony of purpose. If there is noise at all, it's of the wind blowing through carefully sculpted archways, ringing in perfect tones to convey information to elves in frequencies too high and at rates too fast for any other creature to deduce. It is the philosopher-king's utopia, with no dissent, no want, and beauty in every corner. An elf city expands slowly, almost on its own as each action and footstep over the course of decades slowly weathers the surroundings into more city.

If these societies are pushed out of balance, they cannot course-correct back towards perfection. Elven societies are each a horrific dystopia pretending towards perfection, covering their sins in porcelain and greenery. They may keep slaves of the "lesser folk," scurrying around hidden pathways to move products of elven perfection precisely where they need to be. They may poison the soil, their bleaches and chemical disinfectants leeching life out of their surroundings, an oasis of flora in a wasteland of ash. They may eat the brains of the dead, and go to war to find more dead to eat. They may use powerful magic to shape fortune to their designs, cursing all who know of their existence to destitution and hunger. Elves may rediscover hierarchy, and enshrine immortal royals to enforce brutal perfection at the expense of all others within and without. Elves, to those who know them well, are nightmare-creatures. The word commonly taken up for these elves, desperately trying to compensate for unexpected change and spiralling into horror, is drow. 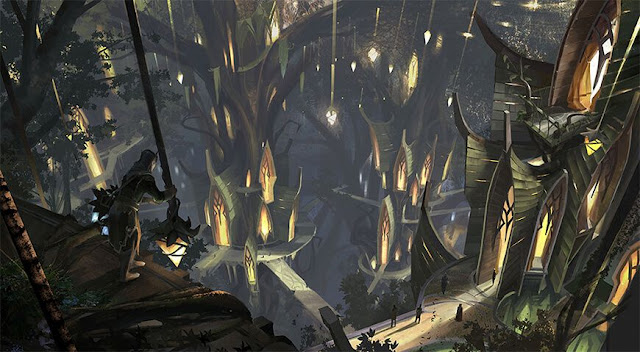 Drow-cities fail. The downward spiral into dystopia inevitably collapses, through scarcity, through revolution, through disease, through infighting, through ennui. The cleaning-hexes run out. Buildings are overtaken by their no-longer-trimmed foliage. Porcelain cracks. Heartwood rots. Fungi and decay spread everywhere, taking what is rightfully theirs from the loosened grip of eternity. The last few elves retreat further and further into the core of their halls, attempting to maintain any semblance of normalcy and purpose in the face of implacable entropy. They take on absurd titles, fight over petty grievances, spiral into mutation, burn their priceless art for warmth. Eventually, the entire city falls to ruin, taken over by scavengers and even perhaps mortals who see the shattered spires as a convenient shelter from the elements. The elves scatter, or die off, or languish for aeons in melancholy and grief.

What was the elf-machine supposed to do? The Purpose of Elvenkind, as the question is phrased in the hallowed halls of elfdom, is the contentious heart of elven religion. Often, this question is taken up by drow-lords trying to repair their failing cities, to find the missing pieces and replicate them through arcane science. Religion becomes engineering, research, experimentation. Holy texts are filled with biotechnical diagrams, musings on the nature of elven-kind merged with histories of failures and speculation on their error. Some believe the machine will bring peace and harmony, that holy grail that so eludes elves and mortals, freeing them from the cycle of decay to which all elves are doomed. Some believe it will birth a new god, merging the elves into a deity that exemplifies all their best qualities. Some believe it's nothing but an art-piece, a proof of concept that is nonetheless so beautiful that it deserves creation solely on its own aesthetic merit. Some think this question is immaterial, and want to unite all elfkind in one great city, bring all the pieces into one harmonious symphony, and let nature shape the machine as it will.

Given the evidence of the drow-cities, some believe the machine's ultimate nature is evil, or a trick to consume elvenkind as they stray from whatever the true path may be. The only moral way for an elf to exist is to disobey their purpose, and venture forth among other mortal folk, never meeting or speaking with another elf. They often turn to adventuring, their own self-hatred and pursuit of alternative religious frameworks pushing them to ever-stranger modes of existence.
Not all elven cities fall to drowdom! Or rather, not all have fallen yet. All begin with high-minded visions of being the one to succeed, or at least one that won't fail. Some maintain elven normalcy for decades, or even centuries. Still, the longer one lasts, the harder it will someday fall. Many larger cities find their end in civil war, as passive-aggression spirals into full-on war. Sides are taken, districts are claimed, and battles are fought as part of radical political debate, every destructive alteration of the city as part of a reshaping work that will overhaul the entirety of the society in question - if and only if one side is unquestionably victorious. More often, the war takes too many lives, and either breaks the city into two competing drow-cities in an endless Orwellian cold war, or one side wins a pyrrhic victory and for decades hence must contend with the form-traps their enemies set throughout the course of the war to avoid their inevitable descent.

Elven warriors fight with seemingly wild abandon. They dance through combat, wielding blades and spears many times the lengths of their bodies. When they emerge from the fray entirely untouched by their foes, spattered with little bits of blood that they quickly scrub away, they seem to be just showing off. In fact, their every move and tactic is calculated to minimize their risk of injury, staying physically out of reach, moving too fast for their enemies to figure out how to hurt them. They opt for minimal armor (chainmail or steel plate, of course, gives them monumental hives), so they can maximize their natural speed and grace. Magic augments their prowess. Often, elves (or serfs, for the drow) act as moving loci for powerful enchantments, throwing themselves headlong into battle to put a spell in the right place to turn the tide. Elven wizards have no compunctions about using their magic to fight dirty. Better the enemies fall to horrific means than the enemies inflict horrors upon the elves.

Elves in other societies are typically adventurers or traders. Elven shops are common in many cosmopolitan cities, trading their supernaturally elegant crafts or intellectual services for rare materials, favors, or secrets seemingly irrelevant except to the inscrutable minds of other elves. Elves who wish to  find a way to better themselves against their nature, or who know their place to be in a far-off elven city, or survivors of and rebels against drow-cities, or hermits finding a place entirely divorced from their mechanical purpose, will all turn to the jobs-for-gold mercenary-explorer life. Occasional elf neighborhoods may grow in the largest cities, their particular experiment with elven society leading them to seek interaction with others. These are typically neighborhoods of outcasts and rebels who have no moral antipathy against other elves, and still resist the common elven dogma that other folk disrupt their paradises. As they pretend not to form utopia, their settlements last longer, but fall to simple attrition as the industrial hazards of city life slowly degrade their forms.

Hiding
1. Have enslaved and purpose-bred goblins to hide between the walls and make all the "magical" feats possible. 3-in-6 chance the goblins are just about ready to revolt.
2. Forcibly control dissenters and visitors with airborne spore-clouds and surgical interventions
3. Unsustainably drain magic from nearby areas to power magical creations and effects, need to expand violently to maintain quality of life
4. Anyone who enters is cursed to never leave until they have performed a number of services for the elven archmage who has deemed themself lord of the city
5. Active, brutal war between two elven factions who disagree over a minor point of decorum
6. All residents have been dead for centuries, replaced by unthinking necromantic effigies living half-lives, killing newcomers to prolong existence