We as game masters elide lots of little parts of the human condition in the name of convenience and decency. Players rarely have to deal with the mundanity of their characters drinking water, shuffling items around in their bags, or dealing with the assorted traumas of slaughtering dozens (minimum) of other thinking, breathing, people for money and power. Still, sometimes digging a little deeper can reveal parts of the adventuring lifestyle that are rather horrifying, when you put your mind to it. Case in point: when you're delving into a megadungeon, a multi-day trek into the bowels (pardon the pun) of a vast ruin, where do you go to the bathroom? Let's reducio ad absurdum the idea of simulating more bits of survival for greater immersion and explore some possibilities for how adventurers dispose of their waste. 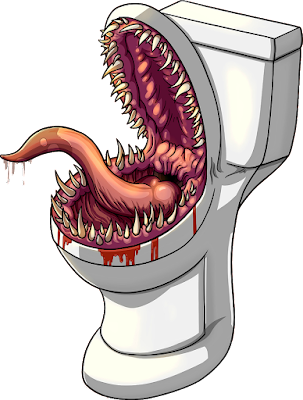 Monsters. Carrion crawlers subsist on virtually any organic waste in a dungeon. Think of them like house centipedes, except instead of amalgamating all the bugs in a house into one larger bug, they amalgamate all the waste in the dungeon into one larger disgusting mass. Incredibly efficient; they don't seem to leave any waste of their own, and they leave dungeon floors spotless. Otyughs can also do this, though they prefer live vermin. If a dungeon seems particularly clean, despite no sign of habitation, watch the ceilings and the pits. Occasionally, adventurers bring their own creatures into the dungeon to clean up after them. Tame gelatinous cubes in buckets are favorites, though you have to ensure it's fed - but not too much.

Destroy it. An enterprising efficiency-minded wizard once spent their life developing the cantrip Remove Waste. A very tailored, watered-down version of the Disintegrate spell, it scours 1 square foot of offending detritus and leaves the area shiny and clean. Does no damage to living non-waste tissue (if it did, you wouldn't be able to wipe with it). The wizard in question, now possessed of the power to never leave their laboratory for want of a wash, proceeded to realize that they spent decades more time developing the spell than the time they managed to save, and went mad.

Hide it. You can't afford to leave a trail when wandering monsters are looking for any evidence of a tasty next meal. Loose cobbles can work to bury shit, as can dirt floors. Sometimes you might even find something valuable while you're digging! Score! Alternatively, if no loose dirt is forthcoming or you (heavens forbid) forgot to bring a shovel on your ill-fated expedition, you can always pack it away in a bag of holding or something else desperate. Bring strong perfumes if this might become the case.

Digging In A Dungeon
1. Loose change. 2d10 copper.
2. Someone or something's skull.
3. Older buried waste.
4. Nest of small monsters.
5. The next floor down's ceiling!
6. Lost memento.
7. Graffiti.
8. Shiny rocks! Not valuable, but pretty...
9. Random mundane weapon, rusted away (1d4 damage and both wielder and target save vs. tetanus)
10. Pottery shards from a bygone age.

Don't reinvent the wheel. Dungeon locals need to dispose of bodily fluids too, and they've usually found their own solutions. Even goblins have a limit to their propensity for filth. Finding outhouses in dungeons can be a chore, especially if they're currently occupied, but it's usually far more convenient than any other method once the dirty work has been done. Also, no one will usually notice the stench of monster bodies you've hidden in the foulest parts of the dungeon.

Portals. Perhaps an extension of the "Hide" and "Destroy" options, more enterprising wizards in the days before Remove Waste created several pocket planes to store a variety of things too hazardous to keep anywhere in the material world. Lazy wizards extended this to other kinds of waste, and a few civic- and environmentally-minded ones connected entire sewage outflows to great portals to prevent the spoilage of the natural world. While great for the world in the short term, all these waste-planes merged due to their conceptual similarity, and formed one great Elemental Plane of Refuse. Its emergent denizens - elementals of sewage, smog, radiation, and other awful pollutants - now loose themselves in the landfills and septic tanks of the world, the byproducts of civilization returning with a vengeance. While you can absolutely open up portals to dump your trash and shit, and it's a very convenient option, be warned that these doors are very much two-way.

A less potentially-horrific version of this is the Summon Outhouse spell, developed by a cabal of wizards who realized how much they'd messed up after the Great Interplanar Landfill Collision of 1XX6. There's only one outhouse and everyone using this spell has to share. 2-in-6 of it being occupied by a disgruntled wizard when you summon it.

Mechs in the Survival Paradigm

://pilot.manual.era//: The Kaiju Era is roughly comparable to the smartphone era, in terms of where we are relative to its beginnin...