And here's three more, in the vein of last post!

Next steps are posts about arcane casters and divine casters, probably. Don't hold me to it. 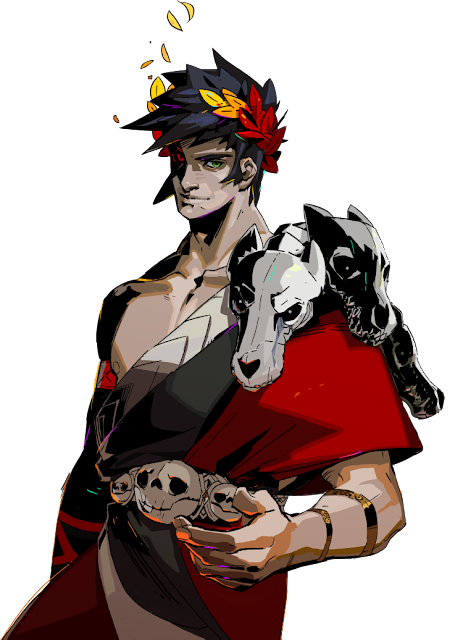 Do you know who my father is?

Gods, demons, elemental princes, fae, titans, machine-minds from beyond the stars, even extradimensional outsiders - they all love to tool around in the mortal world and indulge in the pleasures of the flesh. Sometimes they leave spawn behind, half mortal, half something far greater. Whether you want this lineage or not, it's yours. It comes with power, responsibility, and an unrefusable invitation to the games higher powers play. You stand with a foot in this world and a foot in the next, and the concerns of both tearing you in twain.

To explain some of the Demigod's abilities, we've got to go over how divine casting works in this upcoming hack. Miracles are lumped into Domains, like in my original Cleric class. Each Domain has a certain number of Commands, things that an entity with that Domain will give you power to do. Follow a Domain's Commands to invoke a miracle you know that belongs to that Domain. For each Command you follow, you get 1 Magic Die for the miracle, up to your Devotion. All divine casting classes will give you Devotion as you take more templates; the same way arcane casting classes (like the Wizard) provide Magic dice. Rolling duplicates while invoking a miracle causes a Disfavor roll, as does breaking any command of the domain with the miracle. I'll elaborate more in a later post.

There's only one template. You only get so much of a leg up on mortals; you must travel the rest of the path yourself.

Divine Lineage: Pick a deity or other nominally-benevolent power, and pick up to 3 Domains it holds sway over. They're one of your parents, whatever that means given the nature of their divinity and capacity for reproduction with mortals. You're obviously of immortal stock, and the devout will throw themselves at you in town for benedictions or to serve you as hirelings. You can hire either (Devotion)d4 peasant believers or (Devotion) mercenaries who will swear an oath to your protection this way; they demand no compensation besides rations and blessings. The priesthood will give you access to their stores of holy armaments and theological treatises.

Divine Enemies: As an agent of your parent's will in the mortal world (whether you're willing or not), the followers of their enemies will strike at you to harm your parent. Roll a d6 at the start of each session. On a 1, you've attracted the notice of your parent's enemies, who will take the opportunity to strike as soon as possible. This stacks if you haven't yet been attacked; more enemies will marshal against you. The GM is encouraged to scale these enemies to match your own power in the world.

Who's angry?
1. Deific family with a aeons-long grudge against yours, reasons lost to history
2. Divine diplomat, you've somehow upset the balance of the universe and they're here to right it
3. Fully divine sibling who wants more of your parent's attention
4. Grandparent who disagrees with how your parent raised their children
5. Incredibly distant relation who doesn't even know who you are, just that you exist
6. Local power, mad at you bringing your family's chaos into their territory
7. One of your demigod half-siblings, trying to stay the favored child
8. Parent's childhood rival trying to one-up them
9. Parent's jilted ex-lover trying to settle a grudge
10. Parent's older sibling, trying to ensure they don't succeed
11. Parent's younger sibling, jealous of their success
12. Your parent, who wants you back on the straight-and-narrow

Who've they sent?
1. Adventuring party, cutthroat and greedy, hired to capture you alive.
2. Bounty hunters, all competing for the price on your head.
3. Cultists, poorly-organized but numerous.
4. Demigod, at the behest of their parent.
5. Divine hunting beast that will not stop until either it or you are dead.
6. Inquisitor, singlemindedly driven and singularly well-armed.
7. Mob of misinformed, superstitious peasants.
8. Preacher with a tempting offer in exchange for a favor.
9. Serial killer who specifically targets your parent and their followers.
10. Trial sent to test your mettle.
11. Warriors seeking the most dangerous game.
12. Wizard with a petty grudge they've blown up to titanic proportions.

Manifestation: You can manifest your parent's power, surrounding yourself with a visible aura of divinity. Your eyes and mouth glow bright, your god's holy music reverberates through the area, and you're surrounded by an angelic (or demonic) visage. When you do this, you can wield all the miracles from one of your parent's domains for 10 minutes, but doing this prevents you from disobeying any of the associated commands for a day. On an X-in-6, where X is the number of times you've used this ability today, this attracts the attention of Divine Enemies. 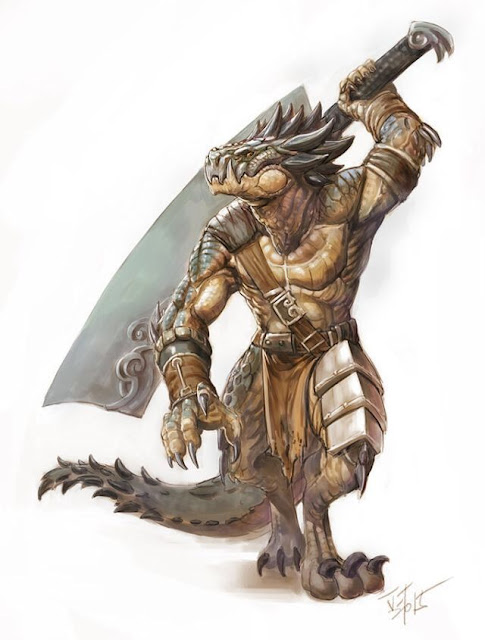 Dragons are the culmination of lives of avarice. Not everyone who becomes immensely wealthy sets themself on the path to dragonhood, but sometimes the glint of gold catches in the eye and its metallic taste lingers on the tongue in such a way that its call cannot be ignored. Possession becomes obsession becomes transformation. Some stave off the call of wealth, of scaled draconic majesty and the power to topple kingdoms. Some simply fail to hoard enough to satisfy their lust, and live forever unfulfilled. And a few become nightmares with names weightier than history, carving up continents, holding entire kingdoms for ransom.

It's a 10-level GLOG, so here's a ten template class. Each level brings you further towards full dragon-hood, and further from your humble beginnings, but taking even one level in another class prevents you from reaching those particular kingdom-conquering heights.

Dragonbreath: You have a breath weapon. Roll and spend a Dragon Die (d6) to deal that much elemental damage (choose the type of damage when you gain this ability) in a 60' long cone. Creatures in the cone may make a Dexterity save to avoid the damage, but additional effects from the elemental damage still occur. Dragon Dice recharge after daily rests.

Gold-Lust: You can smell precious metals and gems (through up to 10' of solid stone), and eat them as rations at a rate of 25gp to a ration, or 100gp to a Dragon Die.

Draconic Mutations: Can be taken in any order, or rolled randomly. Can't take the same one twice.
1. Dragonspeech: You can instinctively speak and understand the language of dragons, which is more real than the world it is spoken into. You may spend Dragon Dice as Magic Dice to power your spells. +1 Dragon Die.
2. Gaze: Your pupils slit and your irises gleam like precious gems. You no longer need to blink, and have infravision but for monetary value instead of heat. Breaking eye contact with you takes a successful Wisdom save.
3. Horns: Gain a d6 damage natural weapon. It knocks back enemies, and the horns are hard enough to dent metal and break through wooden walls.
4. Lair: Designate an area under your exclusive control as your lair. Gain an extra Grit die for every order of magnitude of gold pieces (10 = +1, 100 = +2, 1000 = +3, 10000 = +4, etc) in your lair. After resting in your lair, get +1 Dragon Die for the day.
5. Scales: Gain natural armor as chain. This doesn't encumber you. You can't wear armor.
6. Tail: Grow a long, spiked, whip-like tail. You can wield it as a d6 damage natural weapon, and if you stand still you get an extra attack with it on your turn.
7. Vast: You grow twice as tall, striding as a god among mortals. Gain +4 Strength, +4 Constitution, +1 Meat die, and you require four times as many rations to regain Hit Dice.
8. Wings: You have a pair of large, scaled wings. Spend a Dragon Die to fly for 10 minutes; this die returns to your pool on a 5-6. +1 Dragon Die.

Draconic Rebirth: You complete your metamorphosis into a great wyrm. Grow to the size of a house. +4 Meat dice. Your breath weapon now deals 6d6 damage. You can fly at will. By spending a Dragon Die, you can polymorph into a specific mortal form. In mortal form, you only have access to Gold-Lust, Dragonspeech, and Gaze, but can return to your true draconic form at will. 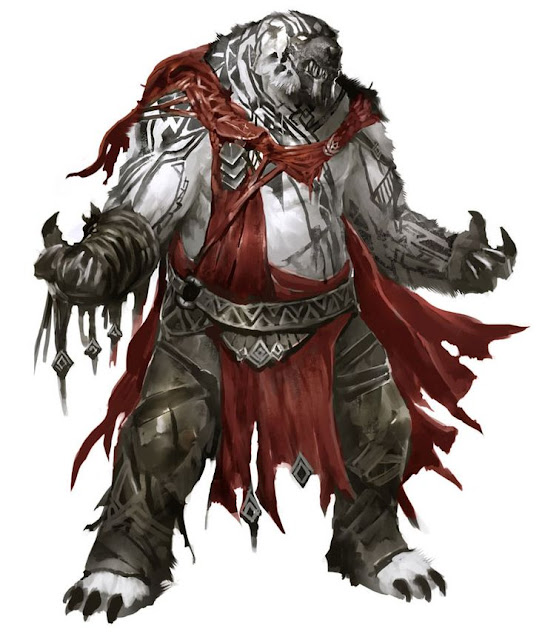 Exercise your right to bear arms.

Werebeast: You can turn into an animal form. While in your wereform, your unarmed attacks deal d6 base damage, and you have all other abilities that the creature would possess, whether extra combat effects, better senses, or new forms of movement. This doesn't change your Hit Dice, and you can't wield weapons or wear armor in your wereform unless you've got the opposable thumbs or fitted armor to do so. You can pass as a totally mundane beast in this form, unsuspicious in its natural habitat, and can communicate with other beasts of its kind. You drop everything you're carrying when you shift. Wounds and scars carry over between forms.

Silver deals double damage to you, and wounds inflicted by silvered weapons cannot be healed.

Animalistic: You gain one of your wereform's abilities (and the accompanying physical features) while in your mundane form.

Dire Were: In addition to your wereform, you also gain a dire wereform that's monstrous and roughly humanoid (or a swarm, if your wereform is something small like a rat or a beetle). It has an new ability that your normal wereform lacks, +1 Meat die, +1 Grit die, and all weaknesses of your wereform.

Alpha Were: You're instinctively recognized as a leader by creatures of your wereform, and by other lycanthropes who aren't also alphas. You can command them unquestioningly to the degree of intelligence they display; dogs are enthusiastic but not very bright, pigs are smarter and get vindictive, bees will follow complex tactical formations.