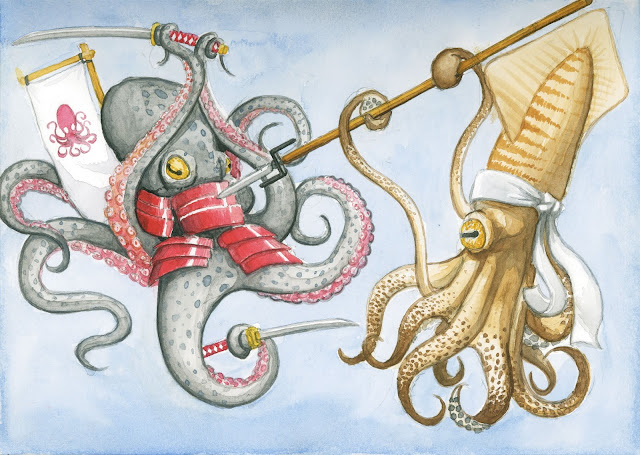 The land is a trifling curiosity, a mess of squabbling primates and reptiles devouring each other in a neverending pointless struggle. The Sepiidan Empire scorns the landfolk - it rules the sea. Long ago, the cuttlefolk learned that their camouflaging skin could be used for so much more. Certain patterns and colors could stun, or charm - or trigger subservience instincts in a variety of other molluscs. They built an empire, as brutal and vast as its rulers are squishy. What they can't control through their own powers, they dominate with their legions. The last thousand years of oceanic history are a long record of holding actions, surrenders, and extermination campaigns against the indomitable and ever-expanding Sepiidan forces.
1. Cuttlefolk: reroll CHA, can change colors, 1/day cause strong emotion in everyone looking (save negates), step down hit die

The Cuttlefolk are small, short-lived, weak, and squishy. Is it then any wonder that they rule an empire? Long millennia of hiding and running as a consummate prey species them made them paranoid, convinced them of the essential hostile nature of the universe, and gave them long unique grudges against every other creature in the oceans. With new and terrifying powers of psychology at their disposal, they're working down that list of grudges, enacting tenfold vengeance on every predator species who has ever tasted cuttle. They are the new top of the food chain - and it's only a matter of time until the landfolk fall under their gaze.

Nautilids once had a long, bright histoy reaching back aeons upon aeons. They claim they predate the gods, and they once had artifacts to prove it. Now, under Sepiidan rule, those artifacts collect dust in the great golden cuttlefolk treasuries. As the first to fall under the sway of the Empire, the nautilids are now naught but the cuttlebone of the Sepiidan armies. A force of nautilids is nigh-invincible to conventional arms or subterfuge, and backed up by the psionic might of the cuttlefolk, they've become an ominous sign across the oceans that dark times are nigh.

Octopodes are solitary folk, coming together only to reproduce and trade knowledge. Curious, insightful, and deep thinkers, each has a complex set of philosophies and theories developed over the course of decades. Of course, everything changed when the Sepiidan Empire attacked. Their octopode servants are forced into close proximity, to build new war machines and research new fell magics - or just to cater to the ever-changing psuedo-intellectual whims of the cuttlefolk, who demand new paradigms that place them at the top and justify their atrocities.

The landfolk molluscs baffle the cuttlefolk emperors. On one tentacle, they're brethren, of a sort. Squishy, curious, eminently susceptible to cuttlefolk mind-magics. On the others, they're landfolk. They're irrelevant, like all other superoceanic affairs. So the slugfolk and snailfolk keep their independence, for now, existing in small slow settlements on the edges of civilization. Many of their colonies delve deep into ancient ruins and dungeons, with long communal memories stretching back to when the ruins were constructed.

6. Squidfolk: reroll STR, tentacles give you two additional hands of carrying capacity and can inkbloom as a Fog spell 1/day, senses are halved out of water

Squidfolk are the resistance. Able to dive deeper and survive far greater pressures than any cuttlefolk or their servants, they strike at Sepiidan reef-fortresses and supply lines from abyssal trenches in a guerilla war of attrition. Yet every captured squidfolk is another addition to the cuttlefolk armies, and every year those armies push closer to the squidfolk strongholds. Many now make desperate runs to the surface, to make allies or find lost landfolk magics that could turn the tide.