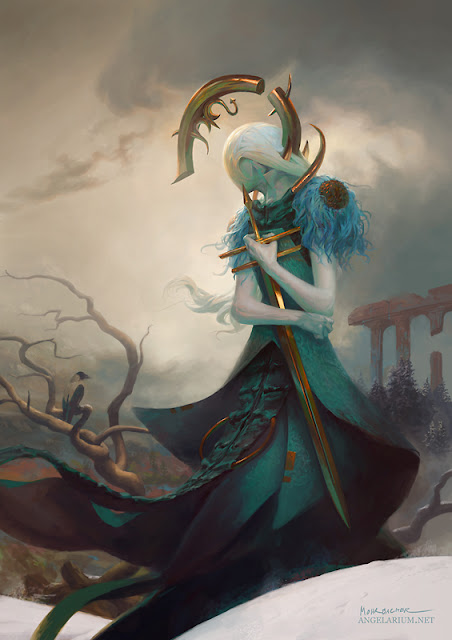 The world is full of powers and entities, few of which fit the conventional mold of gods. Just as you can speak with anything if you know its language, so too can you bargain with them and ask things far more powerful than you for favors.

I based this on Arnold K.'s fantastic new rules for religion. He writes about how conventional models of religion in tabletop RPGs - limited to clerics and paladins, focused on a pantheon of gods who've divvied up the domains of the world between them - approach the subject backwards. I've taken a lot of the ideas within, and expanded them into a slightly larger set of abilities and powers that all characters can access.

Anyone can pray for aid, and any power may listen. To pray, name what you pray to, make all your preparations, then the GM secretly rolls a d100. If it’s equal to or below the % success chance, it succeeds. Augury and Blessings take a 10 minute turn each. Success chances start at 0%, and increase in a variety of ways.

Don’t bother a power by demanding the same thing over and over again. They’re capricious and petty, especially if they pretend not to be.

Augury. Ask a question. The power will show approval, disapproval, or a fell omen of disaster. Success gets a true answer, failure gets a random one. A priest may coax out more detailed answers or even portents.

Blessings and Curses. The power will provide aid that’s within its purview (like getting a temporary background, temporarily learning a spell, or a free success on a specific type of roll), or hinder someone likewise. Blessings last until you displease the power or the end of the adventure; curses on your enemies last until they atone or the end of the adventure. If you’re working at cross purposes to the power you're petitioning, you’ll get cursed instead. Powers are smart; trying to game their intentions is like playing dice against the dice themselves.

Oath. Swear a binding oath enforced by the power. If swearing on a holy symbol, +50%. On a success, all who swear will be cursed if they break it. Your GM won't tell you if it's been successful. Why would you want to swear an oath? You wouldn't. You'd want others to swear oaths so you can trust their word, and you might swear one in return.

Calling and Binding. Every connection is a two-way street. While powers are far stronger than you, you can wield what little leverage you have to demand, instead of asking. This lets you get a piece of the power to do what you want it to do, pissing it off commensurately. Think of that piece as a demon, a spirit, a subprocess (to use crude computer analogies) that acts independently under both your command and in accordance with the power's personality, will, and aims.

Make a prayer roll to call such an entity. On a success, it comes. It'll do things for you until it gets bored, hurt, or the power needs it back. The more powerful it is, the more likely its services will be recalled swiftly. If your needs conflict with the power's, make a roll under the original calling roll to see who it'll listen to (success: you, failure: the power).

At any time, if you've called an entity, you may make another prayer roll to Bind it. On a success, your further rolls to call it are made at +50%. On a failure, it departs.

If you know an entity's true name, the calling only takes the time it takes to say the name. This can still fail, and will annoy both it and its parent power: imagine someone shouting your name over and over again until you did them a favor, how would you like it? However, the true name will also let you win any conflicting interest rolls. The bill, of course, will one day come due.

Mortals don't have true names until they die, at which point their true name becomes the name(s) they knew themself most closely by. Calling ghosts is possible, though their parent power might not be at all what you expect.

Intervention. In direst straits, facing imminent death, you can pray for salvation. Divide all bonus %s by 10. You may make oaths of devotion or promises of future sacrifice in this moment to increase your chances. If you succeed on the intervention roll, you will be saved, and all oaths sworn in the frenzied pressure of the moment are binding.

If a priest performs the ritual, +10%. Might not literally be a priest, depending on the nature of the power; that's just shorthand for someone who's gone above and beyond in their service or worship of it. An incredibly rich man may count as a priest for the power of Profit; a berzerker in the midst of their blood-frenzy for War. A player character can become a priest by satisfying certain conditions set by the Power, which are not easy to revoke or take back.

If you’re devoted to the power, +10%. It takes successfully swearing an oath to devote yourself, and you can only be devoted to one power. Devoting yourself to another will get you cursed, or hunted, or worse (Powers are jealous, especially when they say they aren't).

At a holy site like a shrine, +10%. You can build one in an Explore turn unless the area is desecrated. Holy sites only count if they're dedicated to the power you're praying to.
At a temple or church, any gathering place for worship, +25%.
At a uniquely wondrous site, like Uluru or the Kaaba, +50%.

Make a sacrifice. If the power has reason to especially favor the specific sacrifice, double the bonus. Can’t make multiple sacrifices of the same level for the same prayer.
Minor, like a bottle of good wine: +10%.
Major, like a cow: +25%.
Epic, like the leader of an enemy army: +50%.