The Charcuterie Board is Served!

The GLoG is a wonderful, writhing thing made of teeth and nails and goblin-flesh. It slumbers, on occasion, but only so its waking hunger is that much deeper. Fortunately, a party of expendable lackeys foolhardy treasure-seekers filthy gretchlings esteemed bloggers (including yours truly) have seen fit to prepare a delicious meal to sate the GLoG's hunger, as well as perhaps your curiosity about what this madness is. It's free*!
*if you eat, you stay
The Charcuterie Board 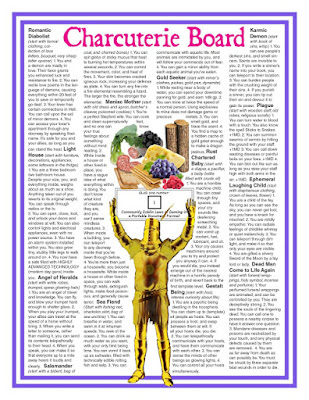 Here's my contribution to the Charcuterie Board all on its lonesome - I urge you to read the whole zine, it's fantastic, but if you just want its version of SAWN-OFF to throw at your unsuspecting players, it's linked below! (and all the component parts I just couldn't wait to reveal to the world are contained within my blog's SAWN-OFF tag).
SAWN-OFF
And, most importantly, some cut content that didn't quite make it into the incredibly generous 4-page spread I was provided with (but that Oblidisideryptch mourned the removal of regardless). Six regional encounter tables for use in Exploration, and six corresponding dungeon encounter tables for Crawling in your favorite relevant map!
Hexcrawl Encounter Tables
Encounters in an Active Warzone
1. Carrion birds circling → Dire vultures
2. Songs of resilience → Refugee caravan
3. Neutral flags → Mercenary company
4. Rapid hoofbeats → Knight, press-ganged retinue
5. Spent deserters → a Pitched Battle
6. Plumes of smoke → Encamped regiment

Encounters in the Infinite Palace
1. Tufts of orange fur → Judge-tigers
2. Clinking & hubbub → Cannibal dinner party
3. Heraldic trumpets → Foreign dignitaries
4. Soft weeping → Ghost of spurned lover
5. Birdshit → Peacocks, man-eating
6. Smell of bread → Beleaguered chefs
(Oblid wrote an extra 7-10 for this table as a comment on SAWN-OFF in the zine, it's on page 29 if you need more horrors of bureaucracy)