Violence is Never the Answer but Always an Option 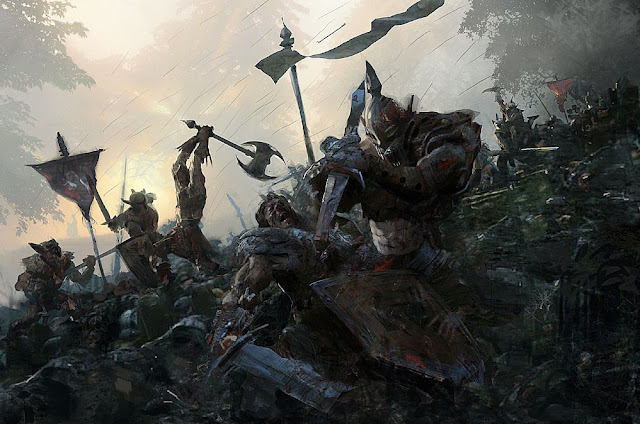 My Turning People Into Corpses post is popular and gets linked around every so often, but is actually pretty outdated. I've overhauled the combat in Mimics & Miscreants a few times now, and I think it's at the point where it's stable enough for me to make a new post. It shares the chit initative, multiple choices defenses, and dismemberment tables of the original version, but has been refined in several important ways that I comment on below.

Initiative
Everyone in the combat gets a chit. Draw chits out of a bag at random; whoever’s chit is drawn takes their turn. When the bag runs out of chits, put all the chits back in and start a new round.

This doesn't depend on DEX anymore, and everyone gets a turn every round. If you want to go first, get a surprise round; otherwise it's anyone's game.

This hasn't changed. Speed is whatever makes sense for your game, I always run combat in theater of the mind (or with minimal visual aid) so actual distances don't quite make sense for me. If you want, use the default 30ft walk/60ft run distances, modified as appropriate by folk and calling.

Fighting
Attacking: Roll d20+your attack ability (Strength in melee, Dexterity at range, Intelligence for spells, Wisdom for miracles). If your enemy has Armor, you have to meet 20+Armor instead of just 20.

Mimics & Miscreants is now modifierless and sum-to-20. Roll a d20, add the whole appropriate ability score, and see if you meet or beat 20. If you do, you succeed.

If you hit, roll damage. If your enemy has taken more damage this round that their Armor, Wound them. If you fail, they can Take It or Dodge. Natural 1s always miss, and natural 20s roll double damage dice.

Armor now also negates Wounds, in a way I borrowed from the excellent card game Keyforge. Once you've taken more damage than your Armor, you'll start getting Wounded; this refreshes each round. Heavy armor is good against one person, but you'll be overwhelmed by hordes or barrages.

Stunts: When you attack, if you want to do something more complicated with your attack (like tripping, shield sundering, pushing, called shots…), you can Stunt. To Stunt, attack with disadvantage, but inflict that extra effect if you hit (in addition to damage).

No one Stunts in my games. I don't know how these rules hold up in play.

Unarmed Attacks deal d4 bludgeoning damage by default. If you're dual-wielding, you can make 2 attacks per turn, but you step down your damage dice.

Defending: Roll d20+Dexterity+Armor. If you succeed, you can Dodge or Take It. On a 20, you also get to take an extra turn afterwards. On a 1, they crit you for double damage dice. If you fail, the enemy rolls damage and Wounds you if the damage is greater than your armor.

Only the players roll in this system. If you want enemies to be more accurate, you can impose disadvantage or other penalties on Defense rolls. One of my philosophies is that players shouldn't just be sitting there listening to the GM recite numbers, because I've been both a player and a GM in that situation and it's boring no matter which side of the table you're on. Players also like rolling dice, no matter what OSR theorists like to say about rolling as few dice as possible, and I'm here to give them their polyhedron fix.

You can choose to either evade all the damage or take some of it. If you're surrounded, you'll have to start taking damage. Making Dodging a viable but not ideal option is one of the trickiest problems I've faced in this system, and I'm still not convinced I've cracked it.

Take It (melee): Both sides deal damage, rolled with disadvantage.

This is why you'd choose to take damage - you get to hit back. It's less likely to Wound, but still can chip away (or, with a lucky roll and large enough weapon, inflict some serious damage). Gives players something to do when attacked, which is nice.

Take It (ranged): You take damage (rolled with disadvantage), and can shoot back if you have a ranged attack. This can keep going until someone dodges or dies.

I haven't tried this yet in play. Might need tweaking to prevent endless ranged duels, or maybe those are fun enough to keep this as part of the system.

Parrying: If you’re wielding an item that lets you parry (like a rapier or a buckler) when you Take It in melee, you can make a regular attack back. If you hit, you deal damage and take no damage; if you miss they must Take It - or parry back!

This now extends Taking It, and gives faster characters a choice instead of just dodging every attack. Obviously if you can't parry (hi Wizards), you'll just dodge, but thieves and rangers and everyone addicted to rapiers because they're so powerful in 5e are going to have a good time.

Resting
A short rest takes 10 minutes of downtime and consumes 1 ration. You may spend a Hit Die to roll it and restore that much HP. Heal 1 ability damage. -d4 Stress.

A daily rest takes 8 hours of sleep and downtime and consumes 1 ration. Roll any HD you have left to heal HP, then regain all spent HD. Heal 1 HD of ability damage. -d8 Stress.

A long rest takes a week of sleep, shelter, downtime, and full meals. Set your HP to maximum, roll all HD and heal that much ability damage, set Stress to 0.

One of the big changes to Wounds is that they're all based on damaging ability scores now. Instead of healing discrete wounds (which made little sense with lost body parts), you now just heal the mechanical damage.

Hit Points and Wounds
HP represents your ability to shrug off major damage. You can keep fighting until your wounds become incapacitating. You might not want to. At character creation, you start with 1 Hit Die, which by default is a d6. You spend and roll Hit Dice to restore HP. Some Callings or Folk modify the die size. Some Callings also gain more Hit Dice when you level up.

Wounds now aren't based on the amount of damage dealt, they're rolled on a table (because I love me my random tables) and you don't instantly die at -10 anymore. Instead, you have to abrade your opponent's hit points, then overwhelm their armor to inflict Major Wounds and finish them off.

Physical Wounds
Bludgeoning
Minor
1. Knockdown. They fall prone; can’t dodge, crawl half speed, disadvantage on attack/defense, take move to stand
2. Disarm. Knock their weapon out of their hand. If they can’t be disarmed, reroll.
3. Fractured arm. -1 DEX, disadvantage on attacks (hit ends)
4. Hobbled leg. -1 STR, CON save to move (save ends)
5. Rattled. -1 INT, -1 WIS
6. Sundered. -2 Armor, this breaks shield if they have one (if they have no shield or armor, reroll).

Piercing
Minor
1. Bleeding. Next attack deals damage with advantage.
2. Pinned. If you leave your weapon in, you can disable their arm/leg while it’s in. Removing it gives -2 CON.
3. Punctured guts. -1 CON, -1 STR.
4. Eye gouged. DEX save vs. blinding (save ends). Disadvantage on attacks (hit ends).
5. Laceration. Hurts like hell, take 1 fewer action next turn or d3 damage.
6. Armor penetrating. -3 Armor against your attacks.

Slashing
Minor
1. Tendon severed. Disadvantage on attacks or CON save to move (your choice).
2. Laceration. Hurts like hell, take 1 fewer action next turn or d3 damage.
3. Finger loss. DEX save vs. disarm, -1 DEX.
4. Sliced. Chunk of them falls off. -2 max HP (heal as ability damage).
5. Cleaved. Attack keeps going to adjacent enemy, deals half damage to them.
6. Facial scar. DEX save vs. blinding (save ends). -2 CHA.

Cold
Minor: Chilled. -1 DEX. stuck to whatever you’re touching. STR save to break free.
Major: Frostbitten. -2 DEX. STR save to move, attack, or defend until rest.

You can adapt my Esoteric Wounds simply by making the 0-4 wound the Minor Wound, the 5-9 one the Major Wound, and the 10+ one an effect on death.