Use Every Part of the Wizard

Wizards die; it's part of the job description. Whether by dragon, or by magebane weapon, by magical doom, or by exploding-head-pox, there comes an end to every wizard's life (techniques for preserving a wizard beyond death, such as lichdom, are beyond the scope of this treatise). A dead wizard represents a magical banquet, a whalefall of potential, raw materials for a dozen other things. The cycle of magic closely mirrors that of the cycle of life, and butchers are more than willing to help out, for a fee. Butcheries that provide such grim services never advertise it, but often will offer it to sufficiently unscrupulous-seeming adventurers who pass through their doors seeking rations for their upcoming quests. 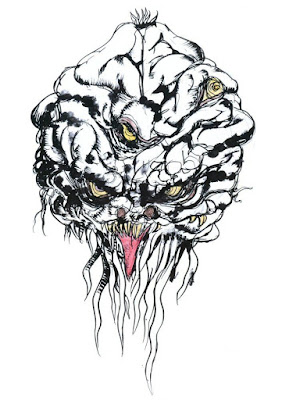 When harvesting a wizard's corpse, the skull and teeth are always salvageable, plus d6 other parts (roll with advantage if you're a Butcher). Unless you're a wizard or a butcher, you don't know any of the following. Gotta mess with/eat/implant them to figure out what they do.

Brain: A wizard's brain becomes a truly warped thing by their alien modes of thought, as the spells within make it home. Based on their school, find what their brain has become. Some examples at Words for Yellow!

Skull: Spells claw at the skull, begging to be released. They leave carvings and patterns on the inside, leaking out through the eyes and down the spinal cord. It's said that a wizard that lives for a thousand years may have the playwright Olliard's entire corpus engraved on the inside of their skull, and while no works of great import have been found written such, the mazework scrimshaw reveals (to a trained eye) the spells the wizard knew in life. Also often quite artistically pleasing, in alien ways.

Eyes: The window to the soul, even after death. Looking through the pupil's of a dead wizard's eyes will let you look through the eyes of their spirit, wherever it may be (usually not Heaven).

Teeth: When a wizard speaks to cast, or mutters curses beneath their breath, their teeth resonate with the arcane syllables. Grind them up and consume them through a mucous membrane to gain a temporary magic die on a (teeth)-in-10 chance.

Tongue: A wizard's tongue, tenderized by magical syllables and eldritch phrases, is a true delicacy. No magical powers, but dishes prepared with wizard tongue are high cuisine, and many nobles will pay a pretty penny for them.

Hair and nails: Powerful magical conductors; as when spells are cast from a wizard's brain, their hair is charged by casting and the spell jumps to the fingernails, from whence it is emitted to its target with a childish glee. This is why wizards often seem to cast from their hands. Harvested wizard-hair and wizard-nails will conduct spells that come near them, channeling magical energy through them. A rope of wizard-hair can cast spells from its tip; clothes woven with wizard-hair may become an ablative defense against targeted spells (on an X-in-6 where X is based on the amount of wizard hair inwoven), and wizard-keratin inlays in jewelry or tablets can create spell-circuits with strange and esoteric powers.

Skin: Turns crusted and leathery not through magic but through sheer lack of bathing and cleaning, but remains potent regardless of its cleanliness. It can be tanned for scrolls and spellbook bindings, and leatherworks made of wizard-skin flutter with life all their own. Ink on wizard-skin curls and shifts, animating its scenes or conveying new messages and wordplay with its text.

Bones: Like the skull, twisted and inlaid by the spells they cast in life. This is less precision inlay and more a consequence of the raw power a wizard holds roiling within their nerves, pounding against their frame with awful abandon. This power is imbued into the bones, and scrimshawed tools or jewelry of wizard-bone carry a potency beyond that of metals. Any tool of wizard bone will be slightly more powerful when enchanted, if more eccentric.

Blood: Wizard blood never coagulates on its own, roiling with the energies it handled in life, and so makes fantastic ink. Blood-ink can't be erased except by magic, and will retain its shape even if its medium degrades. It can also be jellied with enough salt into a tasty treat for various magical creatures.

Flesh: Hardened like tree rings, laden with traceries and veins of heavy metals. Cutting them apart and performing haruspicy (divination by entrail-reading) can tell you what they've done in their past, how long they've lived, perhaps even records of conversations they've held or the secrets that bent their mind. If you have no talent for haruspicy (and few do), you may catch glimpses of their history in the manycolored flame of their flesh. Just don't inhale - heavy metal poisoning is still heavy metal poisoning, wizard or no.

Fat: Can be rendered into thaumaturgical lard, which can then be burned as a scroll. Rather than recording a spell the wizard knew in life, the spell encoded in the lard will be one that encapsulated the wizard's personality - a particularly nasty wizard may render into Cloudkill, or one with a modicum of social skills (rare, for a wizard) into Charm Person.

Heart: Eat a wizard's heart to gain their powers. This is a well-established fact, and the inciting incident in many a folktale. What's less well known is that eating a wizard's heart not only gives you one template of wizard, it's that it's at the expense of all your other templates and powers. It also only works once; trying to eat another wizard's heart will just give you heartburn.

Liver: The seat of the soul, and a wizard's is particularly dense. Even past death, it tethers their soul to the mortal realm, forcing them to manifest as a ghost in times of extreme strife. A wizard liver can be used in any ritual that requires a soul, and can be asked one question by a cleric as Speak With Dead.

Lungs: The seat of the breath, which may have been weak in life but is great in death. They still speak in wheezing hisses, or scream in a bellowing banshee wail. These screams attract spells, and can be used to regain a spell recently cast or capture a spell from the outside world within the lungs. Works once per lung.

Guts: Many of the deeds attributed to angry wizard ghosts are instead the result of spells that missed the brain and found themselves trapped in the guts, still writhing and roiling past death. These bowel-ghasts are toxic and haunting, blighting the surroundings and spreading diseases of the body any mind. Unusable in products unless processed to the point where you'd be better off using anything else's guts, but the enterprising adventurer can surely find a use for some evil spirits. (note: this is also why many wizards tend towards the gaunt and bony - the spells in their guts literally parasitize them, like tapeworms that fight back with fireballs)

Genitals: Wizards and other magic-users virtually always go biologically sterile, but their genitals (regardless of which particular configuration they may have) are magically fertile. A set of wizard genitalia and the right alchemical equipment (found in virtually any alchemical laboratory) lets you breed 2 spells together as if you had that wizard feature, with a 2-in-6 chance of the resulting spell mutating.

Appendix: The appendix, that ignoblest of organs, becomes thick and dense with magic residue (read: spell excrement). Consumption of dried, powdered, or otherwise preserved appendix forces immediate astral projection for 1d6 hours, where the body lies limp and the spirit roams freely between the world and others.

Kidneys: Wizard kidneys have their work cut out for them. The amount of odd mundane things that get into a wizard's bloodstream tax their kidneys to the limit, never mind all the magical oddities that any given wizard ingests on purpose or by accident. They've grown to cope, though, and a bulging wizard kidney once implanted can mediate mutations, coaxing their negative effects into positives, and making future mutations more advantageous as well. If you have a wizard kidney, roll 1 stage up on mutation tables (Negative -> Mixed -> Positive).

Stomach: When inflated, it'll bounce several times higher than you'd expect. Fun for the whole family (except the wizard)! Also, the stomach acid is almost a universal solvent. It doesn't melt through the stomach, but it'll do in pretty much anything else. Handle with care.

Spellscars: A wizard's scars tell a story of their adventures, sometimes literally. By grafting the dead, scarred tissue onto yourself, you can gain whatever power it provided to them, at the cost of d4 max HP.