Hello! Long time reader, first time poster. Figured it was time for y'all to meet the meat.

The Butcher
(a GLOG class) 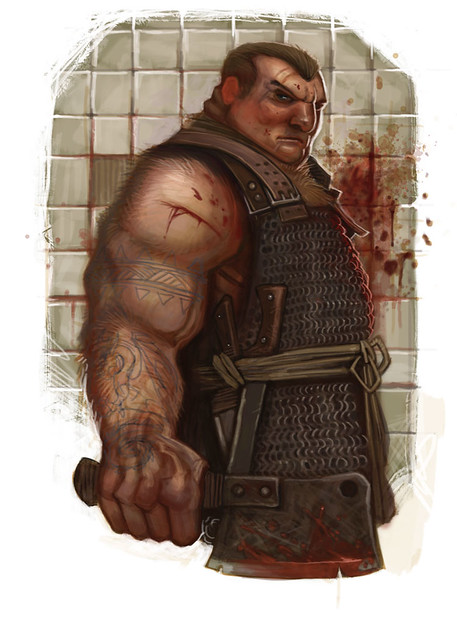 Meat is murder. You're very good at murder.

Butchery: Take a freshly-killed corpse and, in ten minutes, turn it into a Cut you’ve learned. Any character can eat a Cut to get its effects. The rest of the creature can be consumed as rations. Uneaten Cuts go stale, and all eaten Cuts’ effects wear off, at end of day. [HD] in a Cut’s effect refers to the originating monster's hit die size.

Corpse Rendering: Instead of making a Cut, you can take an hour and use a large cauldron of boiling water to render a corpse into thaumaturgical lard, which behaves as a Butcher-exclusive scroll. Monsters render into spells relevant to their place in the ecosystem or their abilities (ex. giant spider → spider climb, purple worm → passwall, goblin thief → knock, bandit captain → command). Spellcasters render into a random spell known in life.

You Are What You Eat: Whenever you eat a Cut that gives you a bonus, you may roll a d4 above the number of mutations you have to retain that ability indefinitely as a mutation. If you fail, your body violently rejects all your current beneficial mutations, and your HP is halved until you return to town and eat some real, non-monstrous meals. You may voluntarily purge all beneficial mutations from this ability during any rest.

Apex Predator: Whenever you deal maximum damage to a creature, you can make a random Cut from it. This is in addition to Cuts you butcher from its corpse.

Cuts:
1. Marrow: Heal [HD] hp.
2. Sirloin: Get +1 to the monster's highest ability score.
3. Fillet: You have advantage on your next [HD] rolls.
4. Trotters: Double your overland and movement speed.
5. Shank: This Cut is a bludgeoning weapon that deals [HD]-1 damage and has a 1 in 6 chance to poison.
6. Stewed Head: All who gaze upon your twisted visage save vs. fear (including allies).
7. Rump: Counts as a full day's worth of rations for a party, or a week's worth for a single person.
8. Sweetmeats: Immediately save to cure one chosen disease, poison, or other condition currently afflicting you.
9. Paté: You become highly suggestible, as under the effects of a Charm Person spell.
10. Raw Dripping Heart: You enter a state of murderous rage. Get Attack +1 and Damage +1, and become immune to fear and pain. You cannot do anything defensive, curative, or tactical, and must pursue fleeing enemies and kill those that have surrendered. Whenever you take damage while raging, save or it ends.
11. Hindbrain: You get the fractured, dizzying memories of the monster's past [HD] days.
12. Forebrain: You get a random skill the monster possessed in life.
13. Steamed Genitals: Save vs. sleep. If you succeed, you become calm and suggestible (as Suggestion).
14. Blood Pudding: Exsanguinates from inside-out. -2 STR/DEX/CON.
15. Lard: When carefully applied over an area (takes 10 min), acts as a Grease spell. Flammable.
16. Tongue: You can speak to and understand creatures of this type.
17. Bone Stew: Your nails and teeth become long and wicked sharp, giving you an [HD] natural weapon.
18. Offal: Save vs. poison. Can be applied to weapons or surfaces, or covertly slipped into food.
19. Caviar: Causes delusions of grandeur. Others need to save or see you as higher social standing than them, but you need to save to remember that you aren't actually higher social standing than them
20. Soul Food: You can ask one question of the monster’s spirit before it passes on. It must answer truthfully, though may answer maliciously (you are eating it, after all).

Starting Equipment:
Butcher A: Cleaver (d6, use to prepare Cuts and turn corpses into edible meat), cutting board, whetstone
Butcher B: Cauldron, bucket

Optional Rule - Special Cuts: Instead of making a Cut you know, you may instead roll with advantage on the appropriate Monster Menu entry (thanks, Coins and Scrolls!)