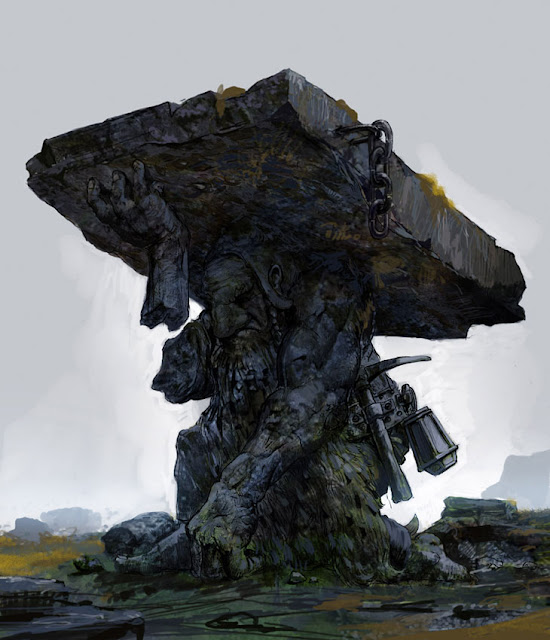 Dwarves are made of solid stone. They carve each other into being. Stocky figures of strata, built short to more efficiently use tunnel-space and wide so the rumblings of the deep-core cannot shake them. They live until their bodies erode, or the exertions of mining and carving prove too much and their form cracks irreparably.

Carving a new dwarf is a labor of two or more dwarves. They don't have gender as such, though some holds restrict who can work together on dwarfcarving for practicality's sake. The dwarves who carve a new dwarf together enter into an arrangement similar to marriage; it's not a thing done lightly. Collaboration on anything is an intimate and personal sharing of ideas, techniques, and even sometimes tools (never use another dwarf's tools in public or without permission, that's obscene). Working alone to create new dwarves is similarly obscene, like incest in human cultures. The combination of multiple dwarves' creative forces is essential to creating well-adjusted new dwarves, for those all created in the image of a single creator will inherit and magnify their creator's worst excesses. This isn't a magical process; it's just how collaboration works.

Counter to popular belief, dwarves don't actually only build each other in the shapes of humanoids. However, only the humanoid dwarves are given legal rights as fully-recognized beings, the rest are treated as a variety of servant castes and tools. The commonly-seen dwarves are merely their workers, though as this work is essential to dwarven society, they're also the most respected caste. When dwarves go to war with surface-folk, they send in soldier-dwarves, as tall as an orc and as broad as a wagon, armed with great weapons that can cut down swathes of enemies. The pinnacle of dwarfare, however, is their siege engines. Elephantine stone turtles with iron shells and battering rams for heads, many-legged stone centipedes carrying dozens of soldiers strapped to their sides, even the occasional giant rising from the earth as tall as a castle bastion. Felling them is a task better suited to pickaxes than spears and arrows.

Not all dwarven creations are dwarves. Their hand-tools are merely tools, their exports have no minds of their own. Anything with smelted metal is certainly not a dwarfmind, the melting and casting process makes sure of that. However, the dividing lines between dwarf and non-dwarf are strange - and none are stranger than their rulers, the dwarven emperors.

Dwarves are no more a hive mind than humans are, though they're commonly stereotyped as such by above-ground folks because of their superficial similarities to ants and termites. The metaphor of an anthive and its queen is actually insufficient to describe a dwarf-hold and its emperor. If you could see through stone, a dwarven hold is just a great skeletal figure, the negative space of tunnels are its bones and the great work-caverns are its organs. Its fingers stretch as transport tunnels and its many, many legs run deeply and greedily into the earth. It grows as the dwarves within excavate. Dwarves in all their forms are a sort of microbiome of their emperor's hold-body. The emperor is the hold, the hold the emperor. It speaks to them in the rumbling drum-speech of the earth. They speak back, with the same reverence humans reserve for their kings and their gods.

The structure of an emperor determines the structure of society within, mediating interactions by their very existence. Every building is the panopticon realized, where surveillance is not merely possible but certain. To revolt, dwarves must literally tear down the structures that imprison them, killing their ruler in the process. Regicide is impossible without changing society. Dwarves hold lively debates, but know always that the walls have ears. A dwarf revolutionary travels far away by rule, not to escape a society that ostracizes them, but because they literally cannot plan revolution within the confines of their emperor.

An emperor has no wasted space, its tunnels barely wide enough for two dwarves to walk abreast, with only just enough vertical clearance for a walking dwarf to avoid scraping its head. However, it's far from spartan - a long-lived emperor is immaculately decorated with carvings and memories of its inhabitants' deeds, with polished floors and gemstone-inlaid furnishings. Dwarves as a rule are not claustrophobic, and live in either communal barracks or have small personal rooms for rests and recovery (they must sleep as any other mortal race does; though large enough dwarves (like emperors) need only put half their mind to sleep at once).

Dwarven nobility direct the expansion of the emperor where it deems delegation necessary, mining deeper, marshaling defenses, and calling for the construction of new dwarves. They live in comparative luxury, speaking with the emperor on closer terms, but always knowing that their dwellings and privileged positions are granted at the emperor's behest and can be taken away at any time. The emperor may feel the agonizing pain of caving-in to kill dissidents, but it's undeniably an effective remedy to sedition or disloyalty.

Dwarves are famous for consuming alcohol above all other forms of nourishment; and any alcohols of dwarven make are famously potent and utterly nauseating to everyone else. As they're made of stone, they lack tastebuds, and they can't easily metabolize anything else. Alcohols are a potent energy source, and dwarves ferment vast quantities of any biological matter they can find (from mushrooms to root vegetables to tree bark) in great pool-caverns underground. These pools not only act as reserves of unspoilable nourishment for dwarven holds, but as food for the hold-emperor itself. One could look at these caverns as a titanic digestive system, with the base of the pools constantly digesting alcohols to power the emperor's omnipresent cognition. Kegs are like fuel cans for the dwarven engines, and a common sight is a dwarf tapping a keg to refill an engine's stone stomach after a busy day of work.

Dwarves of a religious persuasion know that the world itself is the Ur-Dwarf, the crust and magma beneath fuelling a intelligence vast, slow, and very much interested in the antics of its fast-living stone children. The conceptions of mind, soul, and body are all one (and the separation of such is confusing to dwarves who haven't studied human religion). When a dwarf dies, its constituent parts are buried and returned to the earth from whence it came, in striking parallel with human burial customs. Statues of the deceased are considered the highest honor in some holds, but in others such a precise replica is disconcerting.

Human dwellings are uncanny and disturbing to dwarves. They cannot hear the thrum of the emperor, or request service from the furnishing-dwarves. It's like if you moved into a house without windows, lighting, or running water. Dwarves feel similarly uncomfortable under the open sky. They expect to look up and see stone they can speak with, familiar as their own maker. The emptiness of the sky and space and horizon makes them profoundly lonely. This is why you find dwarven emigrant communities in cities; while the dead buildings are uncomfortable, it's far better than having to adjust to the empty, barren expanse of sky. In locations where it's practical, some dwarven communities carve new emperor-districts into the stone below the city or the mountains it's within. These emperors are stylistic and cognitive hybrids, incorporating mentalities from the other architects in the city, sometimes expanding into existing districts built in alien traditions. Older dwarves worry about these emperors greatly.

In human language, the word for human is Wise Folk. In elf language, elves call themselves the Beautiful Folk. Dwarves call themselves the Making Folk. Their personal names are a rumbling hum, like an avalanche played in slow motion. This is usually transliterated with lots of hard consonants and elongated, open vowels, though more cosmopolitan dwarves prefer to have their names translated directly - traditionally a type of stone connected with a certain value set, combined with the chosen name-marks of its creators.

Don't cast Stone to Flesh on a dwarf. That's rude.

Dwarves (GLOG Race): Reroll CON or WIS. Speak with stone at will (1-in-6 of it responding). Made of solid stone. Can't run.