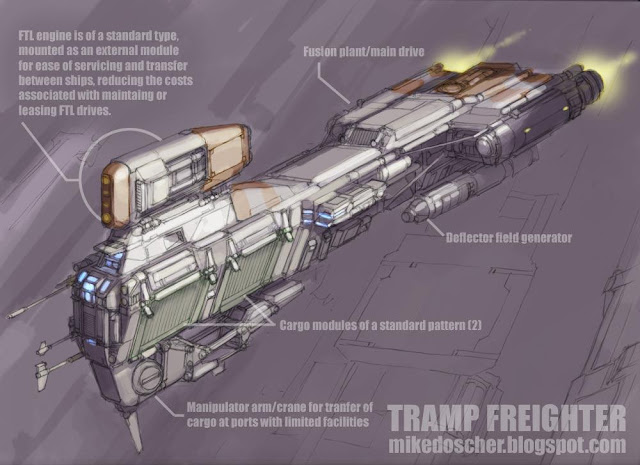 For baseline humans, even the fastest interstellar travel is boring. You're trapped in a metal box with people you'll swiftly grow to resent even if you're close friends, recycling all your air and water and biomass in an endless cycle that only gets more nervewracking as the walls close in and the stars grow coldly menacing. You tread the same corridors day after day, weathering a dull routine into your mind as you watch your instruments for danger that will never come (but if it does, you will all die, quickly, cold and impossibly alone).

Jumpspace is worse, as the ship's windows turn to blind-spots that the eye refuses to parse. Vision slips across the opposite of space, and even when all the shutters slide closed, the underlying wrongness of existing in that dimension bites at your bones, twists your skin, and knots your nerves.

And the waiting, the endless interminable waiting, becomes far worse if you know nothing but death may await you at journey's end. Soldiers often travel in cryosleep so they don't have to contemplate their fate for months on end. Mercenaries and adventurers that need a full complement to run their ships rarely have that luxury. Distractions are essential when tensions run high and anxiety floods the corridors like an electrical fire.

Stress
1 baseline. Humans were never meant to ply the void.
+1 per jump.
+1 if ship is overcrowded.
+1 if the ship is going into a dangerous situation.
+1 for each unexpected diversion before the crew arrives at their destination.
+1 if alone
-1 for each unique morale-building event you participate in.
-1 for each amenity (like holosuites, competent cuisine, drugs, etc) on board.

Some metahuman subspecies are better (or worse) adapted to space. This can add or subtract Stress from individual totals. Similarly, if one character indulges in their secret stash of Pandoran writheweed, or two characters have a truly legendary breakup, that might change their totals too.

At the end of the trip, total up the list, each crew rolls to see how much Stress they gain. Crew in cryosleep gain 2 Stress no matter what; cryo is the cheap option for non-essentials who don't need to be carefully maintaining the ship. Long-haul colony ships have low passage berths for cheap travellers who won't (or, usually, can't) pay for the amenities needed to keep them engaged for the trip's duration. Don't mind the cryoburn. Here's the studies that show the chances of neural degradation on newer models are down orders of magnitude from last generation. And hey, if something in jumpspace decides the ship looks tasty, you'll be asleep for it... 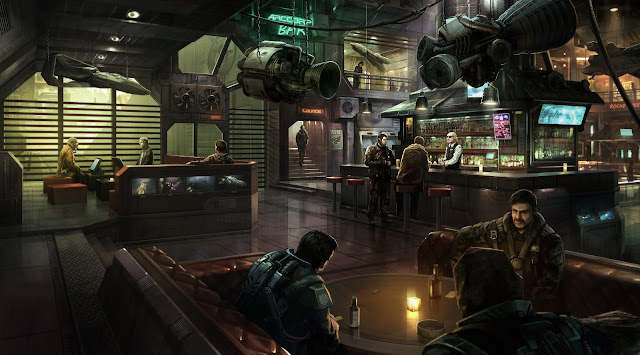 The morale-building events are the meat of this system. In space, you're going to have to relax somehow. A poker table has sufficed for many a small crew. A competent chef with a well-stocked kitchen (none of that freeze-dried crap) does wonders. Spacers have made up an esoteric set of holidays to celebrate, just to pass the time. On larger cruisers, there may be computer systems dedicated to running VR sims, and luxury ships might even build in entire terraria for the crew (or more likely, the ship's owner) to pretend they're back planetside.


Others might have ship's bars complete with hired bartenders (though what the bartenders do to keep their stress down is a well-kept secret). Ships too small for bars regularly have stills in the engine room, fermenting a frightening variety of life-support fungi, megayeast cultivars, and the odd jumpspace lichen into potent brews ranging from surprisingly light fruity spritzers to universal solvents. And alcohol is but the most common relaxation incentive, with a whole suite of exciting spacedrugs on offer at the local spaceport. Some are even legal (depending on jurisdiction and corporate sponsor)!

Of course, there's a set of Company-approved morale-building exercises, complete with worksheets and paperwork. Mostly, they boil down to team-building problem sets and unimaginative, sanitized VRscapes. Genetic and psychometric compatibility tests are used to engineer and sometimes mandate relationships between crewers, with universally disastrous results.

Love within the crew tends to be frowned upon by most captains. A breakup can sour the mood until everyone involved's contracts are up, and let's face it: bulkheads between bunkrooms are thin. That said, gossip and rumor spread through ships like wildfire no matter who's sleeping with whom.

Creative endeavors are the go-to for some crews. Collaborative storytelling, songwriting, poetry nights, art, even tabletop role-playing games... anything that gets the crew together and lets them escape their day-to-day drudgery. These get shared around, but often it's far more covert than it would have been in decades past - once the Company caught word, an IP clause became standard in contracts, giving the contracting company exclusive rights to all works created on their ships. What are you gonna do, starve or accept the terms and conditions?

Song is a constant companion. Every crew has that one crusty old spacer with a guitar, a croon, and a head full of old shanties they've learned over their decades spacing. Some stretch back to the first days of spaceflight on Earth, before the first jump breach, before even the disastrous first Mars Landings and the Liar's Flight. Here's a few for table ambience.

Games turn to more dangerous competitions. Undercity fight clubs on space stations often welcome competitors from whichever ships are in port, and so some spacers put their pride in their fists and aim, letting off steam by sparring with their crewmates. The occasional captain turns this into a way to maintain hierarchy, resulting in the tradition of Klingon promotion re-emerging so far from its origins in centuries-old space operas.