LEGAMON: You Must Acquire Them

LEGAMON! You Must Acquire Them (Original Series Theme Song)

I want to be the very best, above the world's law,
To acquire them is my sole quest, then teach them to make war... LEGAMON!

I will explore far-flung locales, find all that's hidden
Seek Legamon! And cultivate, the strengths they hide within...

LEGAMON! You'll fight for me! It's your one true destiny!
LEGAMON! Oh, I'm your best friend, 'til my death, you will defend...

Oh, I feel so free! Your powers win victory!
Nothing can stand in our way! LE-GA-MON... You must acquire them! (You must acquire them) LEGAMON!
Hello there and welcome to the world of LEGAMON! I'm Professor Lichen, and I'm an expert on the creatures that inhabit these lands. They're called legamon - that's short for "legally distinct monsters", due to a nasty copyright dispute between various explorers that initially laid claim to this region. For some, legamon are pets. Others use their immense power to help them work. Myself, I study legamon as a profession, because there's vast amounts of grant money in learning to weaponi- sorry, harness, their unique and fascinating abilities!
Links to other Legamon posts
deus ex parabola started this whole craze. It's their fault. Blame them.
Phlox automated deus' legamon generator!
liches get stitches has another generator, with virtues and vices to generate 'mon personalities
Phlox also wrote on the faiths of the legamon world, and a local translation of the song
SunderedGM has compiled a list of other legamon posts
I was writing 'mon before it was cool - here's my old trainer class
Legamon Battles
I'm sure you're interested in joining the legamon battling scene. I know I was, as a young one - there's leagues for children as young as ten! It's the biggest sport around here, and it's great training for when you'll need to go out into the wilds and defend yourself from feral legamon. They really seem to dislike us. Can't imagine why - maybe you'll discover it on your adventures!
Sanctioned combat between legamon is typically 1v1 with teams of up to 6 and to-exhaustion, though trainers often invent new modes of battle on their own, and doubles matches have gained popularity in recent years. Of course, in the wilds, anything goes.
In a round, the 'mon with the highest Speed goes first. On a tie, flip a coin. On a 'mon's turn, it saves vs. status effects (trainer's choice of order if it's saving against multiple), then it gets to make one move of its trainer's choice. The trainer may alternatively change their active 'mon or use an item on their 'mon, but forgoes the ability for their 'mon to use a move. Once all 'mon have taken their turns, a new round starts, and compare Speeds again to see who goes first in the new round.
'mon types are also damage types. Attacks are either Physical (roll d20+Attack vs. target's AC) or Status (target rolls d20+Save vs. attacker's Save DC). Level 1 Legamon deal d6 damage with their Physical attacks, Level 2 deal 2d6, Level 3 deal 3d6.

#0XX Geisticle, the Icicle Legamon (Ghost/Ice). Level 1. Evolutions unknown.
The spirit of a fallen Legamon, frozen to death on the side of the never-summited Mt. Colossus. It haunts the slopes, ambushing foolhardy climbers in the hopes of making more Geisticles.
1 Hit Die (5 Health), 0 Speed, 0 Armor (10 Armor Class), 3 Save (13 Save Target), 1 Attack, 2 Power Dice.
Physical Attack: Ice. Status Attack: Ghost (Curse). Ability: Ambush. Takes the first turn in round 1 regardless of Speed.
Special Move: FROSTBITE (Ice, Status): Target saves against its blood freezing in its veins. If it fails, it's unable to use Status attacks without taking sum ice damage until it saves against this effect.
Level represents the stage a 'mon is on its evolutionary path. 'mon have level*5 points to spend among Hit Dice, Speed, Armor, Save, Attack, Power Dice; and have one Special Move per level. Hit Dice and Power Dice both start equal to the 'mon's level before adding points; the rest start at 0. Can't go above Level 3. 'mon level up and evolve into a new form when you've achieved a significant emotional bond or milestone with them - don't track XP. Perhaps one of the techniques listed here may aid you in your quest.
Types determines a 'mon's strengths, resistances, and immunities. Resistances halve damage (round up) and give you advantage on saves against moves of that type and status moves, Strengths doubles your damage against 'mon of that type and give enemy disad on saves. Using a Strong move against a 'mon that resists it deals normal damage with no advantage or disadvantage. If a 'mon has two types that give the same Strength, its moves deal an extra level damage. If a 'mon has two types that give it the same Resistance, it can add level to its AC and Saves against moves of that type.
Each type also has an associated status effect. For status effects, level is always the level of the inflicting 'mon. Damage dealt by status effects is assumed to be the same type as the type of the inflicting move – which may not always be the same as the type the status is normally associated with! A Grass-type move inflicting the Bug status Bound will deal Grass damage when the target struggles.
Hit Dice is the 'mon's overall hardiness. Multiply by 5 to get Health. When reduced to 0 Health, the 'mon loses all its will to fight. At negative max health, the 'mon is killed.
Speed. Higher speed moves first in round. On a tie, flip a coin.
Armor. Armor Class is 10+Armor.
Save. Add this to Save rolls to resist Status attacks and shake off Status effects. 10+Save is the 'mon's Save Target, the static difficulty other 'mon need to tie or beat to avoid the status.
Attack. Add this to Physical attack and special move rolls to hit.
Power Dice. d6s, function like GLOG magic dice - spend any number of Power Dice to use a move and roll them. Any dice on a 3 or less return to your PD pool.
'mon all have a basic Physical attack that inflicts their damage type and a basic Status attack that forces save vs. the type's associated status. If a mon has two types, pick one for the physical attack and one for the status attack - these must be different types.
'mon may also each have a passive Ability that reflects their unique advantages and place in the ecosystem.
Special Moves cost Power Dice to use and are statted like GLOG spells. dice is the number of PD spent on the move; sum is the total of all the rolled dice; highest is the highest result on any individual rolled die; lowest is the lowest result on same. Special moves can inflict damage and status types that don't correspond to the 'mon's types, and provide interesting new tools. Special moves are categorized as physical if they involve an attack roll or dealing direct damage, or status if they force a 'mon to make a save, but might have interesting new types if they buff the 'mon that uses them, allow for new movement types, change the battlefield's terrain, or have solely out of combat uses.
It is unknown which 'mon can learn which moves, though not all moves are available to all 'mon, and there is no centralized or comprehensive list of moves. New techniques are being developed and discovered by enterprising legamon trainers every day! 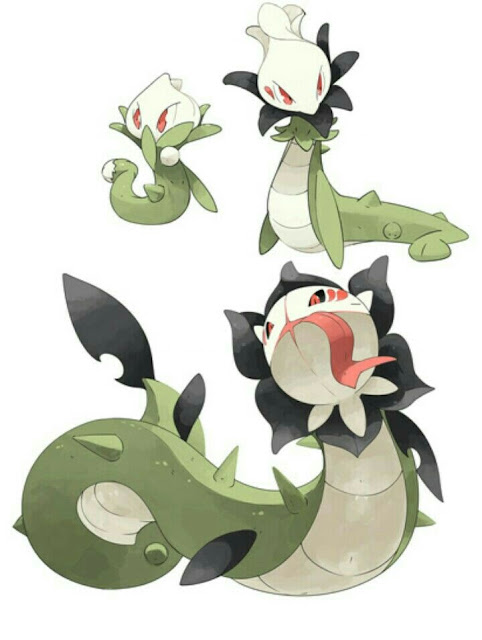