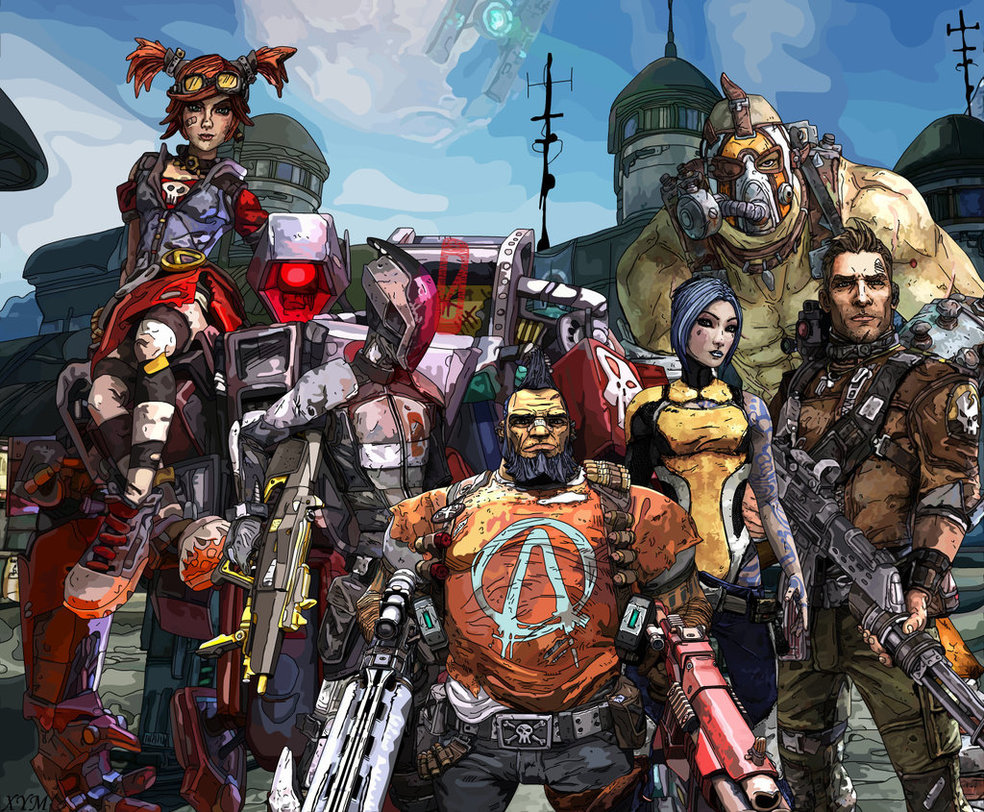 "Lemme explain how things work here: Vault Hunter shows up. Vault Hunter looks for the new vault. Vault Hunter gets killed. By me." - Handsome Jack, President of the Hyperion Corporation.

Hit Die: d6
Starting Equipment: A gun (roll it like you looted it), another random weapon, anything else you absolutely 100% need for your One Cool Thing
Skills (d3): 1. Badassery, 2. Looting, 3. Shooting

Guns! Guns! Guns!: Your loot drops in the form of outlandish guns. Whenever you'd loot something or someone, on a Vault Hunter level-in-6, they drop a gun. No one besides you can use or even interact with these guns; they dematerialize if you don't take them. You can carry a number of guns on your person equal to 1+Vault Hunter level. Roll a d6 to find out what kind of gun it is, then roll all your Gun Dice on the Gun Traits table.

One Cool Thing: Pick one ability another class gets, at any level. If it needs resource dice or some other requirement, you have the minimum needed to use it, and can't get more. To activate it, roll a 5+ on your Gun Die; if you succeed, next time it's a 6+, then a 7+, etc. If it's a passive ability, it lasts for minutes equal to your roll. Whenever you take a Vault Hunter level, you can upgrade your One Cool Thing in one of the following ways.

Gun Traits (d6/d8/d10/d12)
1. You can hit stationary, inanimate targets without rolling.
2. Damage dice explode on max damage.
3. Bullets pierce enemies on max damage.
4. Can be Reloaded as a move action instead of an attack action.
5. Step up damage die.
6. Deal elemental damage in addition to firearm damage, roll on the Elemental Damage table to see what type.
7. Roll damage with advantage.
8. You can throw it as a Grenade to reload. A new copy materializes in your hand.
9. Roll an additional damage die.
10. Fires anything as ammo.
11. Roll 2d10 on this table.
12. Roll a d20 on the Legendary Guns table.

Legendary Guns (d20)
1. Always crits inanimate objects and makes them explode into d6 damage shrapnel of a relevant damage type.
2. At the beginning of each combat round, you get to shoot someone with this gun for free.
3. Bullets home in on enemies. If they miss this round, they'll Dodge the enemy and come around for another go on your next turn.
4. Can charge gun instead of firing it for up to 3 rounds. Each round you charge it, you can have it either deal elemental damage, or add an additional damage die. Roll the elemental damage type when you get this trait.
5. Creates a black hole of bullets that draws in everything within 50' at a rate of 10' per round. Everything within the 10' event horizon of the hole can't interact with anything outside the event horizon, and takes damage as if they were hit by this gun each round. Dissipates in d6 rounds.
6. Every shot deals a different random elemental damage type.
7. Fuses with another gun you own of the same Gun Type and gets its Gun Traits too. Can't be unfused, but you can pick what it fuses with.
8. Has legs! Will run around as a pet and attack people of its own volition. Attacks enemies, but otherwise won't really follow orders.
9. Integrates into your arm. Becomes part of you, and can reload by dealing d4 necrotic damage to you.
10. Is a flamethrower (or an acid-sprayer, or a frost-thrower, or a tesla-blaster, etc). Give it an elemental damage type, and it deals damage in a cone.
11. Is a targeting beam for an orbital laser. Doesn't deal any damage of its own, but in d6 rounds, a beam from the sky immolates the area you pointed the gun for (Gun Type damage die) of each elemental damage type. Works once/day.
12. Is two of the gun stapled together. Makes two attacks each time you fire it.
13. Morphic. Every time you shoot it, it becomes a new gun type. Keeps the same traits.
14. Raises the enemies it kills as undead who fight for you until combat ends.
15. Shoots bees that sting the target, then amalgamate into a larger swarm that flies around the battlefield attacking indiscriminately. Each bee steps up the swarm damage die. Bees leave when combat ends.
16. Shoots smaller guns. Also makes a basic attack of the Gun Type below it on the Gun Type table.
17. Shots encase the target in an elemental damage aura that deals d4 damage to them and everything within 10' each turn (save ends).
18. Wounds for double value (if you'd deal a Wound 3, you instead deal a Wound 6. If you deal a Wound 5+, you instakill).
19. Roll 6d10 on the Gun Traits table. Figure out how the traits stack if you roll duplicates.
20. Roll twice on this table.