It's quiet. You cleared the last five rooms; lost Ygmar the barbarian to a spiked poisoned pit trap, and Naelare the wizard's head detonated after a particularly potent fireball spell. Finally, you can rest, in the room that used to be the kobolds' ooze-growing chambers. It's covered in kobold blood and ochre slime, but at least nothing's trying to slit your belly. You rest against a wall and light your pipe.

Was that corpse there before? Did you miss it? It's certainly got a bunch of loot on it that you must have skipped.

Poke at it with curiosity. It flops limply. Dead, thank god.

Open its coin purse with your knife. You realize your mistake a moment too late, when the inside smells of meat and is full of writhing, snarling teeth.

It splits lengthwise, to reveal a gaping maw in a sickly facsimile of a grin. Its breath is warm and foul, its long, segmented tongue slaps at you and leaves sticky residue behind.

Then - it speaks? It speaks, in a deep cheery burbling.

Literally a Mimic: Don't pick or roll a character race. Instead, you are a mimic, a roughly crustacean-esque creature that can take the form of mundane artificial items. You're limited to mimicking items the rough shape and size of a treasure chest, that you can see. When you see fit to move, you scuttle on little crab legs. You are a perfect imitation of the mimicked object, but when someone tries to use you then your true nature as a voracious beast is revealed as your toothy maw splits open wide. With your maw, you can make a d8 slashing damage bite attack (obviously this reveals you as a mimic). You also have a sticky tongue that extends up to 15'; it deals no damage but can grapple enemies and drag them into your maw with startling speed. You must eat living creatures or raw meat as rations.

Swallow Whole: You know the rule that anything that fits in your mouth doesn't take up an inventory slot? You have a *very* large mouth. Consider anything smaller than a one-handed weapon to fit in your mouth for this rule (though your mouth is much larger). You can fit one entire person inside you, and if you wish, you can deal d4 acid damage to them each round. Anything that you choose not to deal damage to remains miraculously undamaged.

Dextrous Tentacles: In addition to your tongue, you have three 10' long tentacles that are each as strong as a human hand.

Improved Mimicry: You can now mimic anything from the size of a longsword or other two-handed weapon up to the size of a carriage.

Adventurer Mimic: You can now mimic anyone you've eaten. When you do, you perfectly impersonate their mannerisms and speech patterns, but not memories or skills. You may use one of their mental attributes instead of yours. You may mimic one of their 1st-level class abilities, if they have them.

Mimic Clutch: You hatch a clutch of several hundred adorable baby mimics, around the size of a gold coin each. They act as a 3-HD swarm (or several smaller swarms), and can follow simple instructions with great enthusiasm. Their mimicry is imperfect, but they can mimic much smaller items. When they take damage, they can't heal it - instead, some number of the swarm die squirming and squealing. When they consume a creature, there's a (consumed creatures)-in-20 chance of one growing into another full-grown mimic, which may travel with you as a companion of its own volition until it finds somewhere nice to settle down, perhaps in a 10-foot-square dungeon room guarded by an orc. 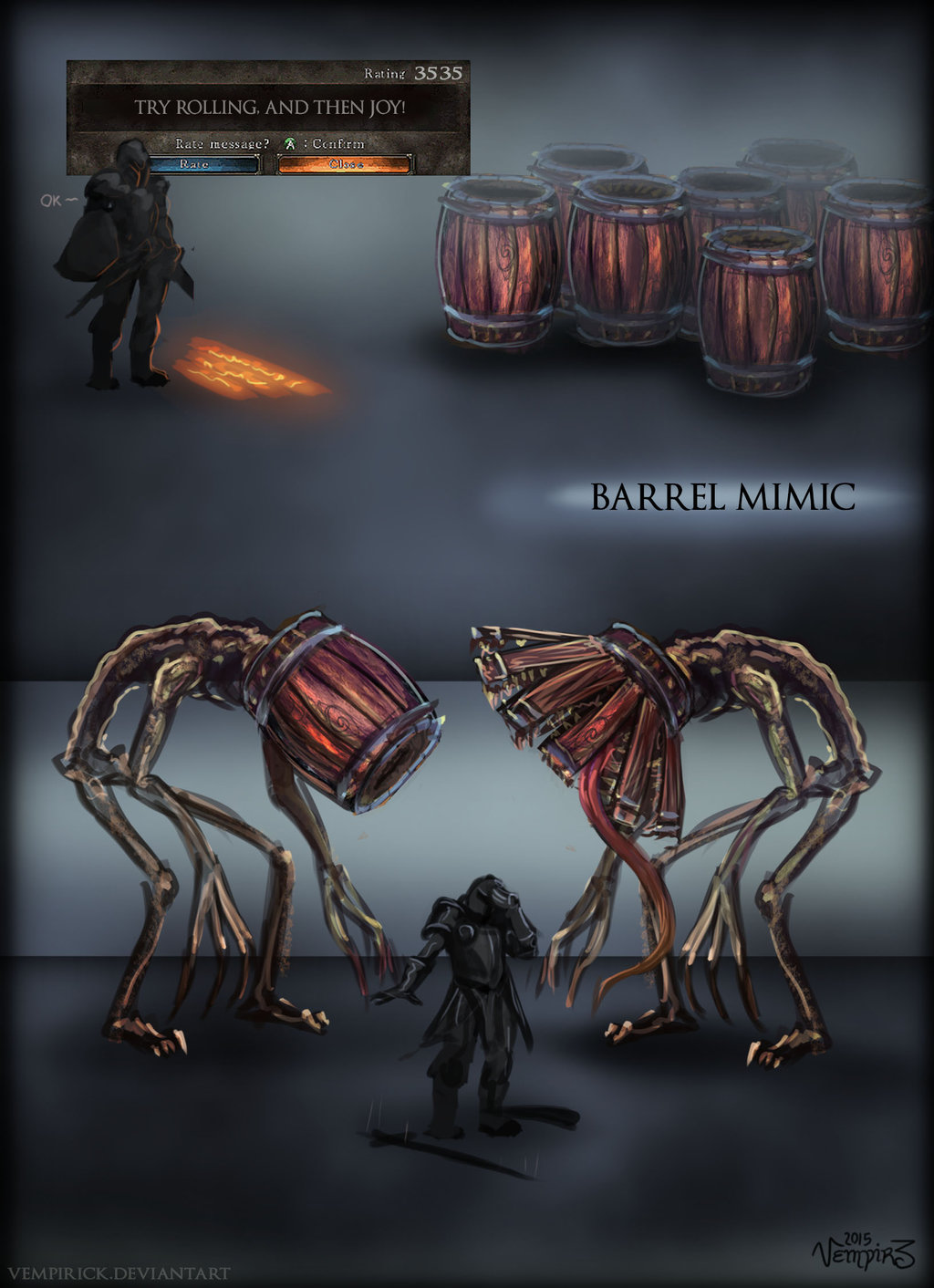 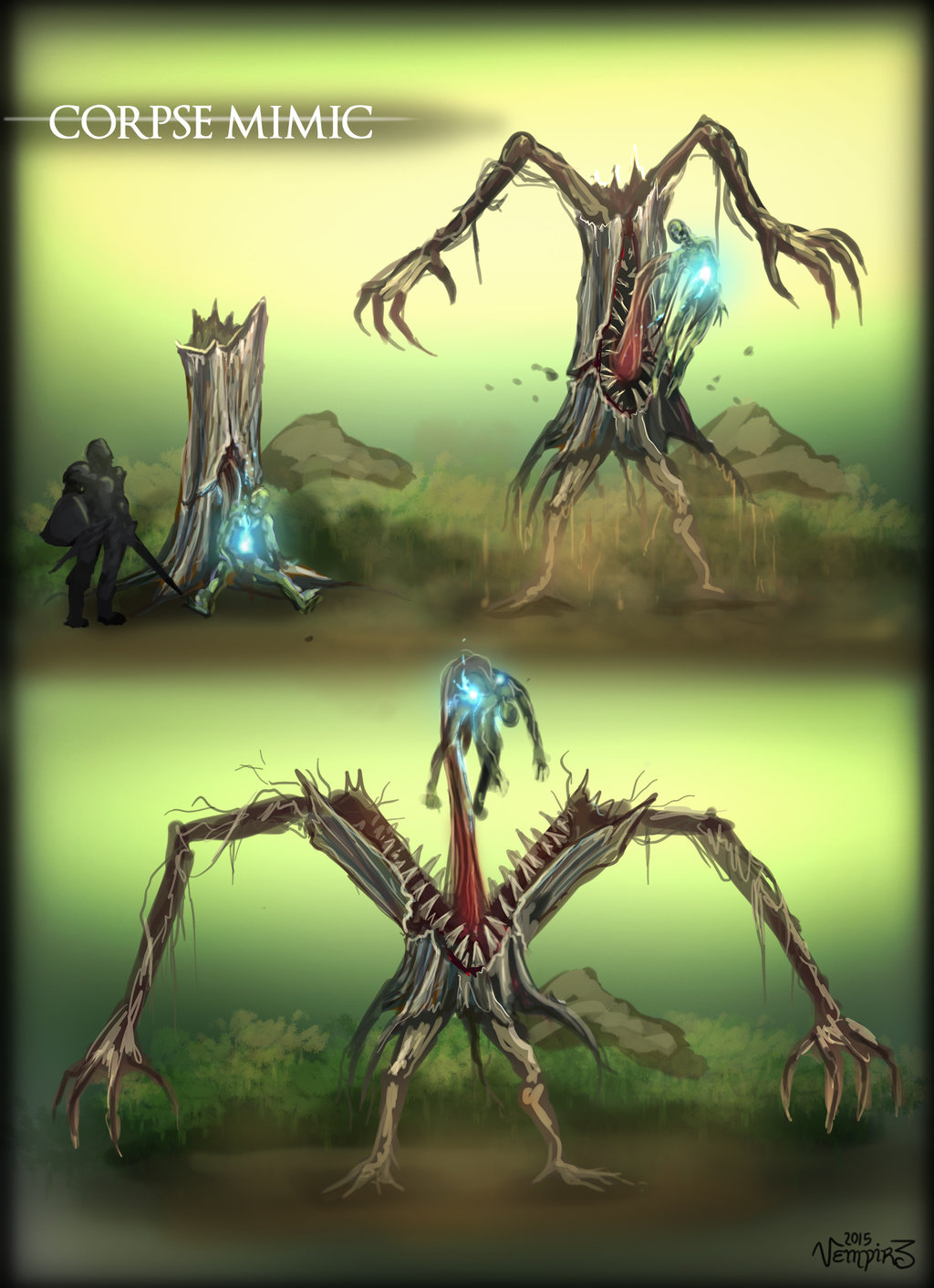 all the above are by vempiric on DeviantArt