I've written parallel looter-shooter classes for fighter, thief, and wizard, but what of the erstwhile cleric? Well, which sci-fi (or sci-fantasy, I guess) franchise features warriors gifted with immense power by an outside force, who use that power for (ostensibly) saving the system and (usually) accumulating tremendously powerful weaponry?

You've read the title, you know. Eyes up, guardian. 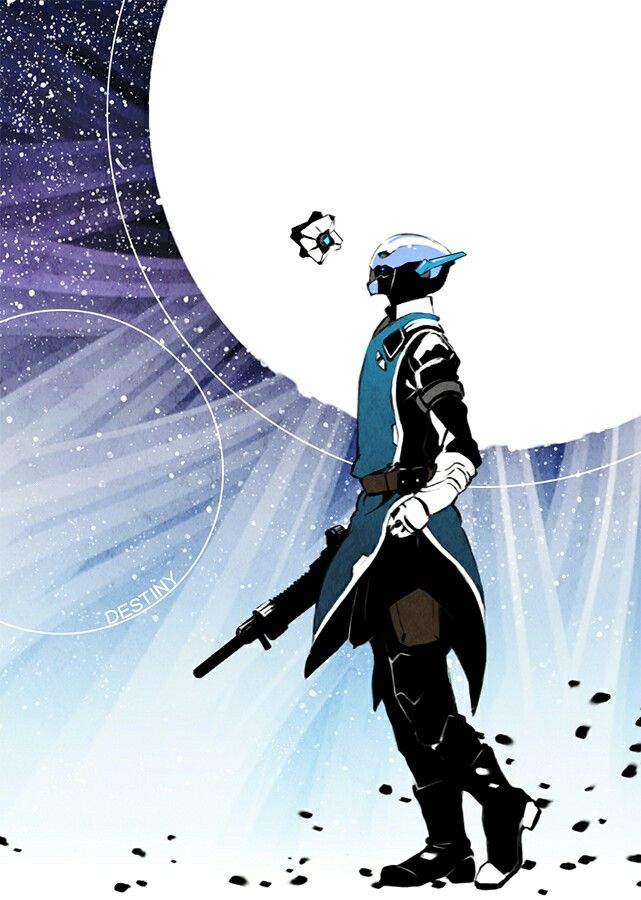 Deathless: As long as you have at least one Light Die, if you die, you are resurrected with 1 fewer LD. LD lost this way cannot be regained until you take a long rest in town.

Traveler's Light: Light is victory. You can spend a number of LD up to your Guardian level after you roll and are told if you would succeed or fail. Roll all spent LD, and add them to your roll, then see if you succeed with the new result. If you do, the effect is loudly and visibly magical, and your light Flares. If you fail, regain all but 1 spent LD (minimum 1) to your pool. Spent LD are restored after a daily rest (unless lost through Deathless).
Flares (d8)
1. Illuminate the area. You glow for ten*(dice) minutes.
2. You and everyone watching have a vision. It's intensely disorienting, but has at least 1 accurate detail, cloaked in metaphor and allegory.
3. Light congeals into a starfield surrounding you with a radius of 10*(dice)'; it starts small fires as matches.
4. Everyone watching is temporarily blinded for (dice) rounds (WIS save negates/ends).
5. Light sources for 10^(dice)' around you flare out of control.
6. You are temporarily transmuted into a form of light. You have a 3-in-6 chance of being intangible for any given physical interaction for (dice) rounds.
7. Your light cascades, giving (dice) random people around you +(sum) to the next roll they make for the same action you just took.
8. Everyone within 10*(dice)' feels the triumphant light of victory, and is invigored to take the next dangerous risk that they consider.

Traveler's Path: Choose a Domain (as Cleric). You may change Domain when you level up. You can spend Light Dice to invoke Miracles instead of following Commands. Miracles used this way cause your Light to Flare.

Sword Logic: You may spend LD to add to your damage rolls. You can choose how your light Flares this way. If you kill someone with a weapon empowered this way, regain all LD spent on the attack.

Traveler's Gift: Your Light crystallizes into a Legendary Gun. It deals damage of a type associated with your Path. By spending an LD, you can immediately succeed on a stunt with that gun.