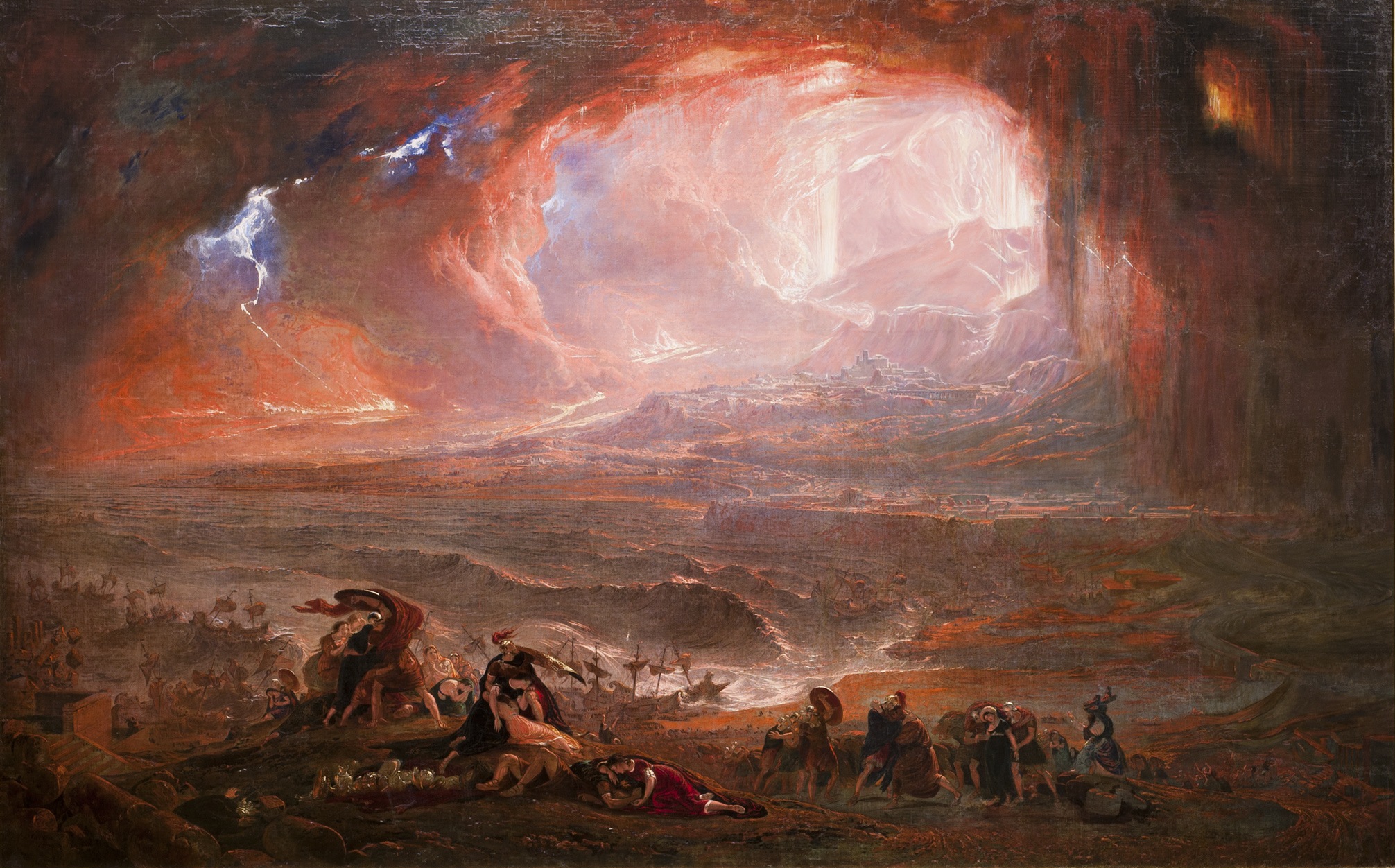 These spells are legendary and devastating. They are engraved into the histories of nations, spoken of in hushed whispers, their tomes chained and bound beneath fortresses at the ends of the earth.

Each spell takes up the entirety of a spellbook, and has a casting time of dice hours.


1. Transmute Sky to Fire
Range: dice miles; Target: radius; Duration: sum hours
Every cloud within range turns to lava and falls on the battlefield, dealing (dice)d12 bludgeoning damage to whatever it impacts. Rain becomes liquid fire (save for half damage each round you aren't in cover), and rivers of fire manifest from head height to dice*100 meters above the battlefield (1-in-6 chance for each combatant to be caught within one, 3-in-6 for flying combatants). Touching the liquid fire rains, rivers of fire, or fallen lava-clouds deals (dice)d6 fire damage. All these will melt through everything they can before they reach the ground, and set organic matter ablaze.

On doubles: The caster's orifices leak lava as their blood turns to fire in their veins. Nothing but a charred skeleton encased in igneous rock remains.

2. Animate Everything
Range: dice miles; Target: items and constructs; Duration: sum hours
Every item and construct within range smaller than a breadbox/person/wagon/house (1/2/3/4 dice) is magically animated and fights on your side. Treat armor, weapons, and other items on friendly combatants as +1. Enemies' armor tries to suffocate them, enemy weapons try to strike their wielders or their wielders' allies, etc. This effect extends to anything of mortal make, including siege engines, defensive walls, tents, rations, torches, alchemical concoctions...

On doubles: The magic encircles you and entrenches itself in your brain. Until you die, items you touch will animate and try to kill you.

3. Summon DEATH
Range: battlefield; Target: enemies; Duration: instantaneous
For dice weeks before this spell's casting, slay civilians and consecrate them with a silver coin beneath their tongue. For each civilian slain and consecrated this way, DEATH itself will arise upon the field of battle and instantly slay one enemy combatant. No save. DEATH is very good at its job.


On doubles: DEATH is not yours to command. It takes you and everyone else complicit in its binding with it, as punishment for your hubris.

4. Conservation of Badass
Range: touch; Target: one creature; Duration: sum hours
So long as the target is fighting alone, they get +1HD, deals +dice damage, and can act an additional time (up to sum times) per round for each enemy they're fighting. Everyone within sum miles with active hostile intent that includes the target counts as an enemy.

On doubles: The target swells with power and can no longer determine friend or foe. Every other mortal within dice miles counts as an enemy, and the target is here to kick all their asses. Starting with yours.

5. Power Word: Collateral Damage
Range: dice miles; Target: non-living things; Duration: sum hours
For the duration of this spell, all non-living things within range not worn or carried have 1 HP and will shatter when destroyed, dealing Xd6 damage in an X*10 foot radius, where X is the original number of hit dice the thing had. This includes walls and barriers, but not the ground.

On doubles: You will shatter at a touch. This doesn't expire when the spell ends.

Climate
1. Breathable but gravity-less void, lit by baleful stars, filled with asteroids shaped like platonic solids.
2. Desert of obsidian sand, baked by a black sun that rapidly leaches moisture.
3. Icy caverns, devoid of light and heat, slick with dripping pools of slime.
4. Hell-city, made of non-Euclidean geometries to fit as many sinners into a single block of punishment as possible.
5. Grinding gears of a continental machine, clockwork crushes bones and reaves flesh, traps everywhere.
6. Jagged broken rocks, air literally on fire, can't see beyond a few feet because there's so much fire.

Devils
1. Vast swarms of buzzing, screeching, stinging imps that act more like weather than monsters.
2. Fallen angels, weeping black ichor at the horrors they are compelled to commit.
3. Rampaging chimeras of creatures familiar and unknown, unthinkingly brutalizing all in their path, even each other.
4. Suave black-suited merchant devils, appearing to bargain for souls and sell infernal weapons to both sides of the conflict.
5. Tormentor devils in executioner's garb, carefully cataloging sin and seeking out specific individuals seemingly at random to punish in bizarre ways for minor evils and banal crimes.
6. A single city-sized archdevil, miles tall. Your battleground is around its feet; a careless step could wipe out half your forces.

Sinners
1. Traitors devising each others' torments in an endless cycle of pain and spite.
2. Gluttons fed non-stop with wriggling horrors and noxious concoctions.
3. The proud and noble laid low and denigrated, as footstools and servants to the lowest and meanest devils.
4. The lustful, forced to complete ever more harrowing and demeaning trials for an infinitesimal chance to achieve their desires.
5. The wrathful in an endless war of their own, all against all, resurrecting when slain so they may gain new grudges to take out on each other.
6. The Original Sinner, first denizen of Hell besides the devils.

On doubles: No one returns. Not even you. Hell claims its own.