I wrote up mushrooms a while ago as a race for Mimics & Miscreants, but there's a lot more fascinating stuff in kingdom Fungi than just generic scavenging, biodegrading masses of fungal matter. Here's some of them! 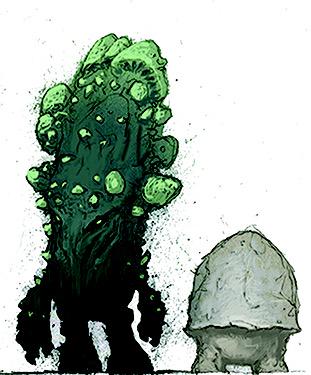 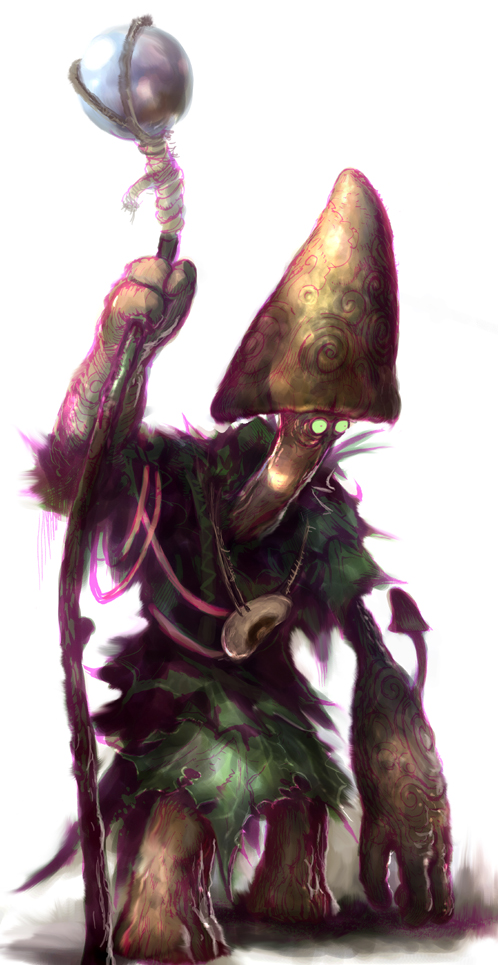 1. Armillarians: Reroll STR. You can consume a human-sized corpse to increase your size by 1 category for an hour, or d6 rounds of strenuous activity like combat. You can stack this a number of times equal to your level, but you need exponentially more corpses. You emit a nauseating stench that is detectable from across a room, and disgusts most mortals.

Beneath the skin of the world lies a fungal bloom larger than nations, deeper than seas, vast and cold and unsympathetic. The armillarians are its envoys. They swaddle themselves in skins and furs and douse themselves in perfumes to walk among the surface world. When they hunger, or simply wish to grow (and growing is their one and only driving force), they consume, for the surface is a banquet and all meat - living or dead - a new entree.

2. Cordyceps: Reroll DEX. You can split off hand-sized parts of yourself to throw at enemies. They must save or the chunk takes root, and forces them to obey one command (chosen when you split off the part) until they next rest. This command can't be innately harmful. Each piece you split off costs 2 HP. You roll to restore HP with disadvantage.

The cordyceps keep to their own in the deep woods, hunting prey with gruesome efficacy. It is rare you see a whole cordyceps; they wear no garments, to facilitate the tearing of spore-fruits from their flesh, which they fling at prey - or more dangerous game. Their monocular visages inspire a cold, silent terror when they come to trade. None dare become the first to turn against friend in the service of fungal reproduction.

3. Lichenfolk: Reroll CON. All wounds until death are treated as the lowest level wound of that type. You move at half speed.

There are lichenfolk everywhere, they just don't like to advertise it. They're more than content to bask in the sun, spooled out across rocks and the sides of trees, letting their thoughts slow to a crawl. Yet when their rest is threatened they congeal, flowing into humanoid form, a mass of alien matter that doesn't stop until either it finds peace once more or dies in the process.

4. Moldfolk: Reroll INT. Your attacks deal necrotic damage in addition to their other damage types. You're an amalgamation of decaying matter held together by your mold, and can't heal. You must instead find a new healthy bunch of matter to animate and feed on. The matter might disagree with this if it can think for itself.

When magical creatures die, the necromantic energy can raise the mold that comes to devour them into a twisted sapience. The mold spreads, and before it devours its food source entirely, it realizes that it can find so much more food if only it knit itself together and moved. And then it does, and shambles across the land, a Frankensteinian amalgamation of the dead sucked dry by blue-green fuzz. Those who tolerate it may find it a valuable companion, if only they avoid its predation.

Mushroomfolk grow great cities beneath the earth, surrounding the vast underground rivers that plunge deep into the crust. As they age, they take root, eventually becoming dwellings and thenceforth one of the great interlinked sessile elders that govern the colonies. In their youth, they travel to bring back new experiences and goods to their homes, and caravans of itinerant mushroomfolk are welcome sights in villages and hovels across the continent.

Brewing is the third oldest profession, and the foundation of many a civilization. So when wizards got their hands on breweries, they naturally tried to improve them. Sometimes this failed, sometimes this succeeded, and always their efforts had amusing results. One such byproduct of magical fermentation is the yeastfolk, animate hive-minds of trillions of yeast shaped into a roughly humanoid form. The wizards who initially created/discovered them wanted to use them as mere autonomous alcohol factories, but the yeastfolk had other plans. After sending the wizards into a deep stupor and escaping, they now are a common sight in many metropoli, running taverns and breweries of their own.