So, the Oblidisideryptch just released a new Berzerker class for the GLOG that absolutely blows my Barbarian out of the water, and has a really evocative Raging mechanic that works like Wizard schools or Bard genres.

Here's how this rage mechanic works (and I totally dig it):

You have Rage Dice (d4s) equal to your level. When you want to enter a rage, roll any number of your Rage Dice. Your rage lasts for (sum) minutes. Rage Dice burn out on 3s or 4s, or if you roll doubles/triples/etc. They only return on a daily or long rest. When you roll doubles or triples on your Rage Dice, you get the related Froth and Malaise effects from your Conduit.

While raging, you get (dice) extra attacks a round, (sum) bonus temporary Hit Points, the Passive benefit of your Conduit, and can use the Active benefit at the cost of cutting (dice) minutes off your rage. You can't take any actions that don't contribute to you brutally murdering things while you're raging, and it automatically expires when all enemies are dead, subdued, or driven off, regardless of how much time is left. You can try to end your rage early on a 1-in-4.

If you aren't currently raging, you also automatically enter a rage with all your remaining Rage Dice when you take damage, unless you succeed on an INT save at a -RD penalty.

Here's a few more Conduits for aspiring Berzerkers to play with:


Conduit: Murderous Mantra
I am one with my rage and my rage is with me.

Passive
You are supernaturally calm. You cannot be frightened or charmed. Nothing will sway you from your grim mission.

Active
When you pass a save, you can force another creature in the combat within range of the effect to save against it instead.

Triples
1. You astrally project your mind from your body, become intangible, move at double speed, and deal psychic damage with your attacks (Froth), but your meat body is a drooling immobile husk (Malaise).
2. Your blows connect with immense strength. All your attacks deal maximum damage (Froth), but you take maximum damage from all attacks (Malaise).
3. With each repetition, you strike somewhere new. Treat all enemies who can hear your mantra as adjacent to you even if they aren't nearby (Froth), but when you hit someone or are hit by someone you are teleported next to them (Malaise).
4. Roll two Doubles Froths (Froth), but their Malaises also apply (Malaise). 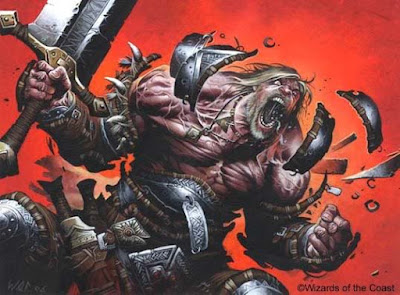 Passive
You are nature, red in tooth and claw. Step up the damage die for your unarmed attacks, and they deal slashing damage.

Active
When you deal a wound with slashing damage, you can eat what you took. Immediately gain the benefit of a random Butcher Cut until your Rage ends.

Doubles
1. You can make an additional unarmed attack each round with your teeth (Froth), but for the next day you can't get the benefits of rations except from creatures you've killed with your bare hands (Malaise).
2. Your blood boils out your eyes, mouth, and nose, creating a red mist that obscures other creatures' vision for dice*10' around you (Froth), but all that blood loss deals (dice)d4 damage to you (Malaise).
3. The stench of battle and rage attracts (dice) HD of fellow local predatory animals that'll go for your enemies first (Froth), but after your rage ends you're gonna be their next meal (Malaise).
4. Your melee attacks deal slashing, piercing, and bludgeoning damage and wounds (Froth), but once you engage a target, you can't change targets until they're dead (Malaise).

Triples
1. When you kill an enemy, they explode into chunks of meaty gore that force anyone they hit to save vs. fear (Froth), but anyone who passes the save flies into a 1-die Hunger Berzerker rage (Malaise).
2. When you deal maximum damage to an enemy you automatically wound them regardless of how much HP they have left (Froth), but enemies have advantage on damage rolls against you (Malaise).
3. You can tear off spontaneous cancerous growths of yourself out to throw as impromptu grenades that deal (dice)d4 damage to everyone within 5' of where they explode (Froth), but doing this deals (dice)d4 damage to you, and not throwing any leaves you with unsightly growths that give you -(dice) CHA, -(dice) CON, and -(dice) max HP until your next long rest (Malaise).
4. Roll two Doubles Froths (Froth), but their Malaises also apply (Malaise).

LEGAMON: Travel Across the Land (Searching Far and Wide)

The commonly-accepted layout of the Cataclys Region.   Here's some more rules for my Legamon region! What would a 'mon game be with...