The Scholar and the Thief

Two skill-monkeys, both alike in dignity. Well, on second thought, not so alike in dignity. One hobnobs with society and spouts pseudophilosophical bullshyte, the other stabs the first between the ribs and takes all their stuff. Credit to Type1Ninja at Two Goblins in a Trenchcoat for the base of the Thief. 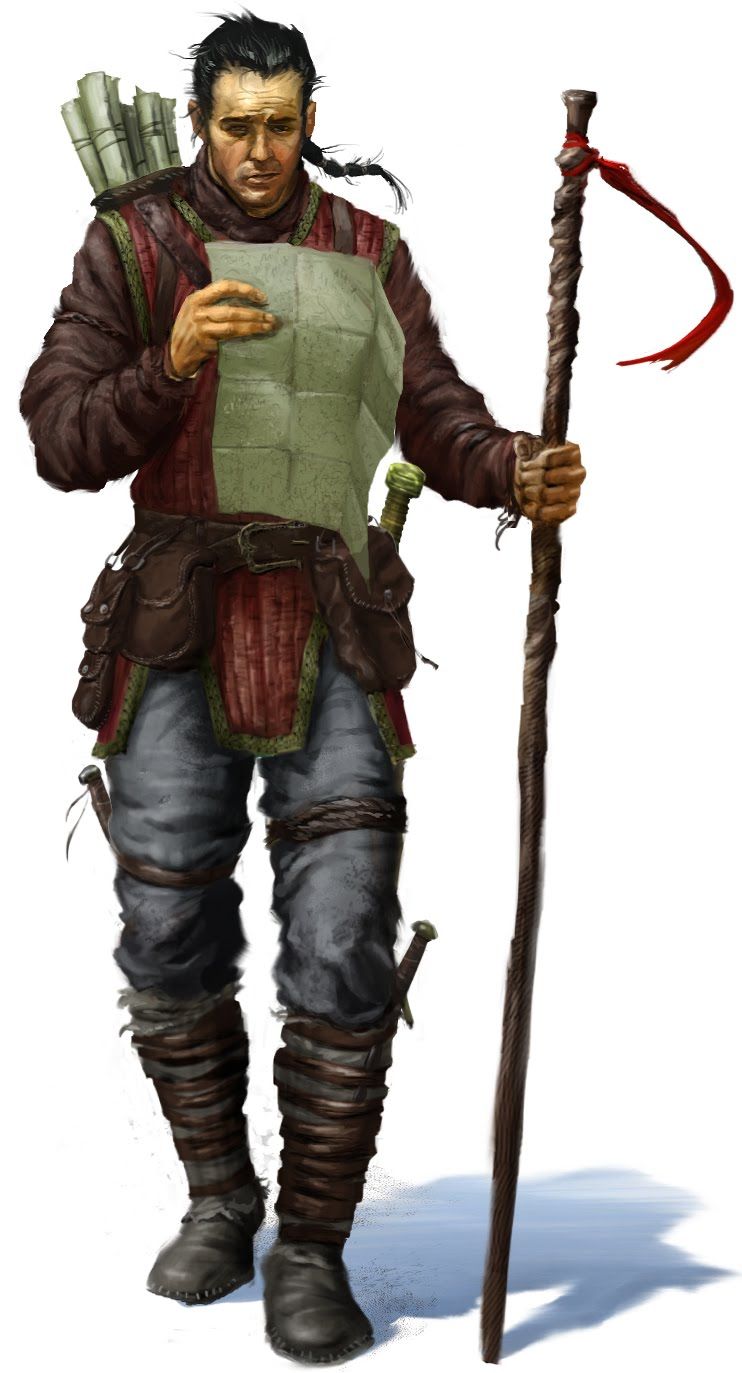 Scholar A: Rhetoric, 1 field of choice, 1 field at random

Scholar B: Educator, +1 field of choice

Fields: You have the listed ability and also gain the appropriate Skill. All chances-in-6 increase by 1 for each additional Scholar template you have. Failure on these chance-in-6 rolls does not mean that nothing happens, it means that you get a plausible answer that has (d4: 1. a minor detail wrong, 2. a major detail wrong, 3. only a minor detail correct, 4. entirely false). The GM rolls the d4 secretly.

Rhetoric: You can convince a layman of anything with a long enough debate. Someone else might be able to convince them back. Educated persons such as other scholars, certain nobles, or young wizards (though not more experienced wizards) get a save.

Educator: You can, during a daily or long rest, give up to [level]*2 people enough training in a Field you have to give them the associated skill. Every time they sleep, they must save vs. forgetting what you've taught them.

Font of Knowledge: You've read and learned so much that whenever you examine something, you can remember additional trivia about it on a 3-in-6 (like a Field roll).

Fields
1. Alchemy: You can identify substances and know how to handle them safely. You know how to mix poultices that give +1 HP when healing, and potions that imbue the drinker with effects of their ingredients on a 2-in-6. Tools: Box of glassware, tongs, goggles, thick gloves
2. Anthropology: You know the customs of other civilizations both ancient and modern, and can make predictions about their culture on a 2-in-6. You can deduce the general meaning of their writings on a 2-in-6. Tools: 3 small trinkets from other cultures, dead language guide
3. Architecture: You can make accurate mental maps and sketch them perfectly. You know the general plan of any building you see, as well which walls are load-bearing, and where the designer may have hidden secrets. Tools: Measuring tape, calipers, level, mapping paper, set of pens
4. Art: You can paint photorealistic paintings (takes 1 hr). Reproduce accurately from memory on a 3-in-6. You can sell your paintings in town. Tools: Portable canvases, paint set, brush set
5. Astronomy: You can navigate by the stars, and make astronomical predictions about the weather (accurate on 3-in-6) or the future (accurate on 1-in-6, get 1 cryptic detail from the positions of the stars) once per night. Tools: Warm heavy coat, spyglass, sextant, astrogation charts
6. Etiquette: You know how to compose yourself and seem like you belong, no matter the social scene. Nobles do not get saves vs. your Rhetoric. Tools: Sewing kit, makeup set, 2 sets of fancy clothing
7. Journalism: You can scribe in any handwriting, and you can write prose that will be believed by the masses no matter what twists in the truth it may contain (as Rhetoric). Tools: Field notebook, set of fancy pens and inks
8. Law: You can, on a 3-in-6, argue yourself out of legal charges, and on a 2-in-6 argue others out of legal charges. Failure might make you enemies, or get you out given stipulations. You can write legally-binding contracts, and can on a 2-in-6 slip in clauses that the other side won't notice (on failure, there might be unintended loopholes). Tools: Book of law, a friend in the local legal system
9. Linguistics: You speak and are literate in 2 additional languages (+1 for each Scholar template), and with a day of exposure to a new language, you can speak it crudely (2-in-6). A week lets you speak it conversationally (4-in-6). A month lets you speak it fluently. Tools: Translation dictionary, field notebook, quill and ink
10. Mathematics: You can perform advanced algebra in your head, predict the flight paths of objects with perfect accuracy, accurately eyeball measurements, and judge the amount of strength (and length of lever) you would need to lift any object. Tools: Abacus, book of reference tables
11. Medicine: Anyone you tend to during a rest gets to roll HD with advantage, and you can heal an additional wound of theirs, or give them advantage on a save vs. disease. This forgoes your own chance to heal during the rest. Tools: Scalpel set, thick gloves, long coat, jar of leeches
12. Music: You can sing and play music that can powerfully evoke an emotion of your choice in all listeners. When you stop performing, the effect stops. You also have perfect phonographic recall, and can mimic tunes (and some natural sounds) from memory. Tools: Instrument of choice, mechanical metronome, pile of assorted sheet music
13. Occult: You can identify whether an item or effect is magical. You can read magical runes and scripts. Tools: Vials of esoteric powders, robe with inlaid sigils
14. Oratory: You can get and hold a crowd's attention for as long as you're speaking. Your voice carries over distances of up to a mile. If you shout, you can distract people in earshot, who get disadvantage on whatever they're doing. This only works if it's surprising. Tools: [level]d6 fans whenever you return to town to give speeches
15. Philosophy: You can cast 1 random spell as a Wizard's cantrip. You can spend a long rest studying and retraining your mind to learn a new random spell to replace that one. You can convince wizards that they can't cast spells on a 2-in-6. Failure causes both you and the wizard to roll on the Flux table. Tools: a set of logic puzzle toys
16. Research: You can guess where in the town/region/world you might find a particular piece of information on a 2-in-6. You have a 1-in-6 of having already read something about it. You can read 30 pages per minute, with perfect recall. Tools: 3 random books
17. Tactics: With ten minutes of observation, you learn the tactics a group of foes will use on a 2-in-6. While traveling, you can stretch supplies for double their duration OR you can make the party travel at double speed. Each round in combat, you can give someone within earshot an extra action. Your party has +1 initiative. Tools: Random ornamental weapon (step down damage die), spyglass, maps of area, compass
18. Theology: You know a Domain and can invoke 1 miracle as Cleric. You can obey the letter, rather than the spirit, of your domain's Commands. Tools: Holy book with accompanying annotations, various sacred incenses
19. Who's Whom: always know someone's name and social standing if matter of public record. If you've spent more than an hour in someone's company or read sufficient biographical information you have a 2-in-6 to predict their reaction to any given event (increases by 1-in-6 for spending a week/month/year in their company). Tools: Book of geneaology and noble crests, an unspecified favor from a local official
20. Zoology: You can identify mundane creatures, their dangers, and how they are valuable and/or best-prepared to eat. You can calm them on a 1-in-6 if they are hostile, and tame them on a further 1-in-6. Failure means they won't stay that way for long. Tools: Thick gloves, magnifying glass, net, lantern, 3 syringes of tranquilizer

A treasure stolen is a treasure earned.

Con Artist: So long as no one can verify what you’re saying is wrong, you can lie through your teeth and they’ll believe you for at least d6 minutes.

Skills (d20):
1. Lookout
2. Forger
3. Poisoner
4. Gambler
5. Pickpocket
6. Casanova/Seductress/Them Fatale
7. Doctor
8. Merchant
9. Hunter
10. Cartographer
11. Musician
12. Bully
13. Cook
14. Jailor
15. Duelist
16. Fop
17. Cultist
18. Sailor
19. Gladiator
20. Animal Handler
Talents
1. Acrobat: You can move an extra 15’ per round (45’ total). You can jump 20’ instead of 10’. Treat your falls as 20’ shorter.
2. Actor: Anyone can use makeup and do an accent, but your makeup and accents are impeccable. You don’t have to roll to impersonate someone in casual conversation, but gaps in your knowledge can still reveal you.
3. Cat’s Eyes: As long as there’s a little bit of light, you can see 30’ in darkness (no color).
4. Coward: Cover grants an additional +1 AC
5. Divine Grunt: 1/day Issue an irresistible one-word command. Only affects: d4 1 Undead, 2 Animals, 3 Plants, 4 Furniture
6. Fashionable: Fancy clothes provide +1 AC and don’t encumber you.
7. Getaway Horse: You start with a horse. Horses you train can DEX test for stealth with advantage, understand abstract directions, and follow a schedule to the minute.
8. Lucky: 1/day, reroll one of your d20 rolls.
9. Dog Whisperer: You start with a dog. Dogs you train can DEX test for stealth with advantage, communicate if an area is obviously dangerous, and track a week-old trail by scent without fail (barring magical concealment).
10. Opportunist: When you have a situational attack bonus, deal an extra 1d6 damage.
11. Quick Fingers: You have advantage on DEX tests to pickpocket people. You can steal things directly out of someone’s hands with a DEX test.
12. Recorder Crow: You start with a crow. It can make and play auditory recordings. It responds to Record, Stop Recording, Play, Pause, Rewind, and Fast Forward. Max storage: 1 hour. It’s very smart.
13. Redirect: Once per round, when an enemy attacks you, you can roll DEX to redirect their attack to another enemy they can hit.
14. Second Chance: Once per lifetime, cheat death.
15. Square Meal: Lunch heals you to full HP provided you pair it with alcohol.
16. Tongues: 1/day Speak with d4: 1 Weapons, 2 Doors, 3 Birds, 4 Clothing
17. Tricky: Advantage on Stunts.
18. Urchin: A street rat demands to learn under you. They’re a very sneaky hireling that doesn’t ask for pay. If you lose your urchin, you can recruit another wherever urchins are plentiful, but it will be difficult if you have a reputation for getting them killed.
19. Watchful: You have +1 initiative and a 50% chance of acting in surprise rounds. You can’t be snuck past.
20. Wizardly Initiate: By tasting an object, you can tell whether or not it is magical. You know one cantrip.