Fighters are boring. You have a stick and you hit people with it. Sometimes you can also take hits real good. This has been axiomatic through pretty much every edition of D&D, especially 3.5e and most of 5e. The best thing to ever happen to fighters, ironically, was when 4th edition decided they should be able to do something besides simply hit people with sticks, and maybe hit them in unique and creative ways. 5e, unfortunately, backed off this everywhere besides the Battlemaster, which honestly baffles me - they clearly saw Maneuvers as worthy of inclusion, so why did they restrict the most interesting part of being a fighter to a single subclass?

I'm not WOTC, nor am I designing for 5e, but that idea that fighters are getting the short end of the options stick has informed my design choices for Mimics & Miscreants, which I swear is gonna get posted sometime in the next week or two before my game starts in earnest. With no further ado, I present: 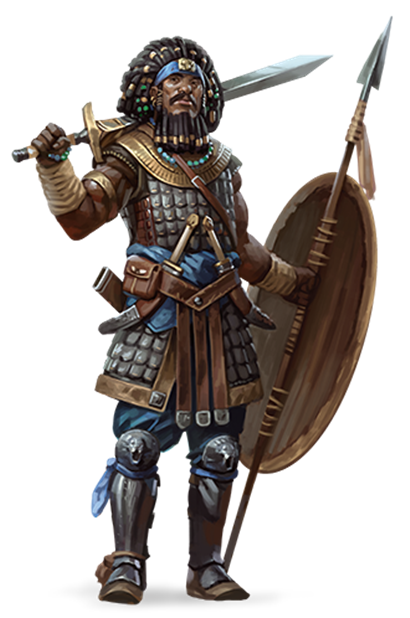 "If fighting is sure to result in victory, then you must fight." - Sun Tzu, inventor and subsequent perfector of fighting

Cleave: When you kill a creature or roll max damage, you can make another attack.

Push Through: Once per day, when you would be reduced to or below 0 hit points, you can be knocked prone and go to 1 hit point instead. In addition, at any time, you may take your turn to spend a hit die and regain that many hit points.

Threat Assessment: You can ask one question about the capabilities of an enemy you either have 5 interrupted minutes to observe, or hit in combat.

Tools of the Trade: You can switch weapons once per turn for free.

Commander: When in town, you can hire up to [level]d4 soldiers, d[level] of which have 1 level in a martial class (fighter, thief, barbarian, ranger, or adept). As a group, they demand equal shares of the loot, but will follow your orders. Here's some of the fine folks willing to accompany you.

Lord of War: Whenever you personally kill a creature with more than twice your hit dice, gain a mundane ability it has or 1HD.

You can shoot inanimate targets within range without making a roll.
Your bow attacks pierce targets, dealing half damage to whoever’s behind them.

Step up the die for your unarmed attacks and add STR to damage.
If you hit a target with an unarmed Stunt, you can make an additional non-stunt attack against them.

4. Dual Wielding (two weapons)
Don’t step down damage dice when dual wielding.
If you hit a target with one weapon, get advantage on stunting against them with your other attack.

You get an additional +1 AC when parrying.
If you hit on an attack after a parry, you crit.

6. Exotic Warrior (exotic weapons)
If you’re wielding a weapon that your enemy has never heard of, you can stunt without losing damage on a miss.

When you absorb all the damage of an attack with your armor and shield, you have advantage on your next attack against that enemy.
Shields only count for one encumbrance.


8. Great Weapon (two-handed weapon)
Your Cleave bonus attacks automatically wound.
If you hit a target, you can attack another target adjacent to them. You can’t chain this back to a target you’ve already hit this round, but can keep going until you miss.

9. Improvised (anything not a weapon)

10. Reaver (slashing weapon)
Your attacks leave scars in patterns of your choice.
When you deal 6+ damage with a slashing weapon, you can automatically make the target bleed as Wound 2.